The accused in the Jahangirpuri Violence have been detained in Police Custody, however, a recent video revealed that the shamelessness and guilt are way too far-fetched, especially for the prime Accused, “Ansar”, who can be seen smirking and copying moves from the Tollywood Movie “Pushpa”, while in Police Custody. 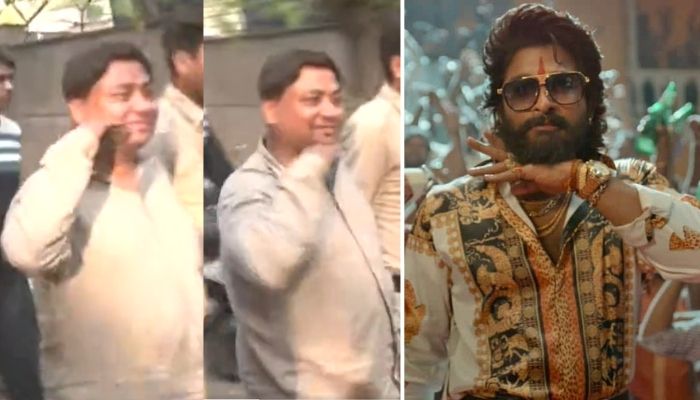 New Delhi: The accused in the Jahangirpuri Violence have been detained in Police Custody, however, a recent video revealed that the shamelessness and guilt are way too far-fetched, especially for the prime Accused, “Ansar”, who can be seen smirking and copying moves from the Tollywood Movie “Pushpa”, while in Police Custody. The main accused of the Jahangirpuri Hanuman Jayanti riots have been identified as Ansar and Aslam, and both have been arrested by Delhi Police. Both the accused are to be produced in Delhi's Rohini court today, but before the production, when the police were taking these accused to Rohini court for their appearance, the accused shamelessly did Pushpa's signature step. Seeing the media standing outside the court gate, Ansar showed the famous beard-wielding action of the Telugu movie Pushpa.

The video of this action of the accused is going viral on social media. It can be seen in the video that the police are taking him for a court appearance, but the accused is smiling continuously. There is no fear of police action against him. Somewhere through Pushpa's actions, he is trying to tell us that he is not afraid of anyone nor will he bow down before anyone.

Ansar, the main accused in the Jahangirpuri violence, who has been arrested, has been involved in many crimes in the past as well. Delhi Police has confirmed this. According to Delhi Police, Ansar has earlier been accused in two cases of assault. Apart from this, he has been booked 5 times under the Gambling and Arms Act. Special Commissioner of Police Lion Order Deependra Pathak has said that Ansar whose name is registered in the FIR has been arrested.

So far 21 accused have been arrested in connection with the violence that took place in Delhi's Jahangirpuri on Saturday. 9 people including 8 policemen and a civilian have been injured in the violence. So far, about 100 videos related to this violence have come to the fore. Based on these, the police are identifying the accused. Delhi Police Sub Inspector Medalal Meena was posted there for security during the violence. He has got a bullet in his hand. He said that the police were separating the two sides, but on seeing both the sides started pelting stones.