It was told in the chargesheet that the procession started from E-Block Jahangirpuri at 4.15 pm on April 16. In security, Jahangirpuri's local police, which was led by Inspector Investigation, besides DCP Reserve personnel were also stationed there. 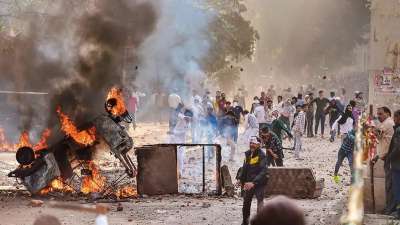 In the case of riots in Delhi's Jahangirpuri, the Crime Branch has filed a chargesheet of 2063 pages against 37 accused. It is clearly written in the important pages of the chargesheet that the rioters had prepared for the riots and stone, weapons, especially glass bottles to attack near Kushal Chowk, were already in the borough.

The court has taken cognizance of the chargesheet of the Jahangirpuri case of Delhi Police. It is written in the file chargesheet that initially the yatra was going on peacefully, till it reached in front of the mosque of C block. There, a crowd of people were already present there under the conspiracy and at the same time the people present there had a face-to-face with the people of the Yatra. After this, the people present in the yatra were attacked by the mob with dangerous weapons, glass bottles and stones were also thrown.

The people present in the yatra also protested and the atmosphere gradually turned into riots. According to the police chargesheet, it has been found in the investigation that some people present in the procession of Hanuman Jayanti had also carried firearms, swords and sticks. The police have arrested 31 Muslims and 6 Hindus in this case. According to the police, some officials of Vishwa Hindu Parishad, who belonged to Delhi province, Mukherjee Nagar and Jhandewalan, had spoken to SHO Jahangirpuri regarding the Shobha Yatra. He contacted the DCP office in North West Delhi but did not get permission for the procession but when the procession came out, as a precaution, the police had made full security arrangements.

It was told in the chargesheet that the procession started from E-Block Jahangirpuri at 4.15 pm on April 16. In security, Jahangirpuri's local police, which was led by Inspector Investigation, besides DCP Reserve personnel were also stationed there. The procession was going on peacefully, but when the procession reached in front of the mosque of C-block at 6 pm, Ansar was present there along with his companions. Ansar started arguing with the people present in the procession. The debate turned into stone-pelting and an atmosphere of riots was created.