In a Crimson Red Body-Skimming Gown, and Untamed Layered Curls, Dhulipala chimed a Modern Day Goddess, who’s Fearless, doesn’t abide by ridiculous conventions, and cut caves to make her path rather than walk a humdrum one. 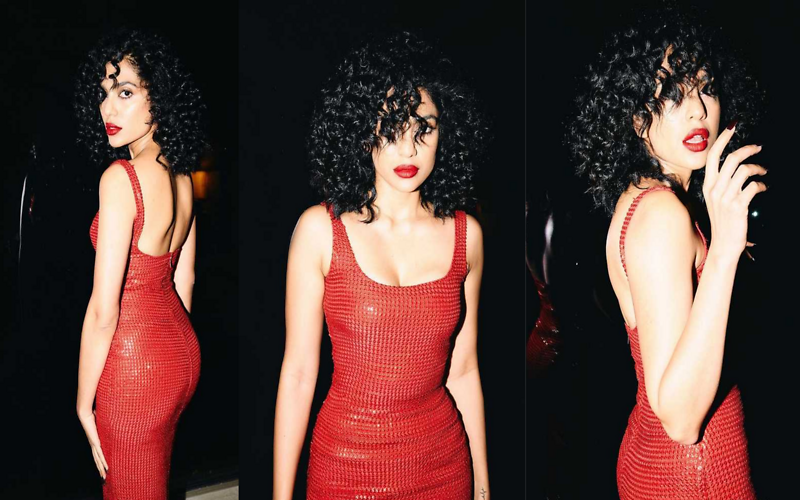 I remember watching the Miss India Tournament with my sister in the year 2013 and immediately encountering a favorite contestant. When Bollywood Actor Asin asked a question, “Do you think it is okay for the Colleges and State Governments to impose Uniform and Dress Codes”, an elegant voice replied, “A deficiency in the Moral Policies cannot be compensated by imposing insensible regulations.” The answer was given by Sobhita Dhulipala, who not only went ahead and was named among the winners of the competition but carved a unique path for herself in the Entertainment Industry. I still remember memorizing that answer and using that as an opening line for many of my debate competitions.

But it isn’t just her Speech, and her acting skills that exude alchemy, it’s her ensembles too. While we’re waiting for some updates on the second season of “Made In Heaven”, and witness the magic Dhulipala and Arjun Mathur create, we can actually compensate by witnessing her Ravishing Ensembles. A mere scroll of her Instagram reveals, to define Sobhita’s style aesthetic, is to comprehend a psychedelic, but a philosophical passage. You are unable to comprehend, maybe, but it does make sense. With an Instagram feed as cathartic as a Lana Del Rey track, Shobita, once again elaborated a sartorial discourse, but with a hinge of valiance.

The 29-year-old actor has often chimed her fondness for home-grown labels, and she promulgated the sanctity of it, afresh, by putting on a Rudraksha Dwivedi’s Crimson Red Sequin Column Gown. But as delightful a sight the silhouettes were, what reinforced her as a perennial muse, was her fearless layered curls. The apparel’s Goddess-like Red shade, the fierce, untamed hair, heralded her as a Modern Day Goddess, who’s fearless, does not abide by ridiculous conventions, and can’t be domesticated by force. In one of the pictures, the sleeveless gown accentuates Sobhita’s Voluptuous self, chiming, her body, a temple. The sleeveless. Of course, she concluded the entire facade with striking, synonymous Red-Lips.

Fashion Blogger Komal Pandey shared the picture on Instagram stories, and mentioned, “Icon.” Icon, Shobita is, for only a few possess the remarkable capacity to portray the complexities inside using art, as blissfully as she did. While we are going to stare right at her profile till our eyes bleed, you might wanna add another inspiration to your Outfit List you’ll be wearing to the next bash you attend.