It Is Still Our Dream To See Kabaddi As An Olympic Sport: Ajay Thakur

Ajay extended his support to his friend, BajrangPunia, who is representing India in the final week of the Tokyo 2020 Olympics. He said Sportspersonsrepresenting their countries in Tokyo Olympics are best in their games and the entire nation is hoping for medals from them. I have a lot of hopes from BajrangPunia and he will surely bring a gold medal to India 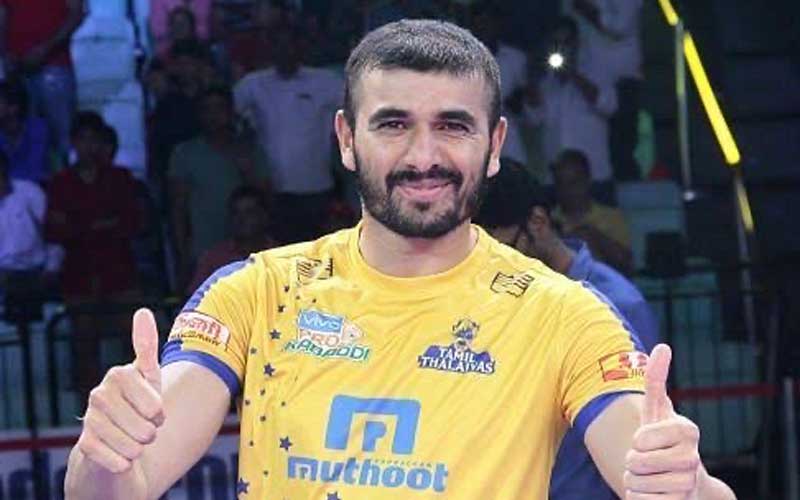 Jaipur: The 35-year-old Padma Shri and Arjuna awardee, Ajay Thakur still remains hopeful of representing his country in the Olympics.The love for Kabaddi continues to grow in the country as the game sparks childhood memories as the majority of the people have played the sport at least once in their lifetime. After having achieved everything possible in sports.  Ajay just wants to see Kabaddi being played at the Olympics. He concluded by saying, “I think Kabaddi already has bigger competitions than the Commonwealth Games. We compete in the Asian games and have a world cup as well, but it is still our dream to see Kabaddi being recognized as an Olympic sport. The rate at which Kabaddi is growing I feel that the dream will come true very soon.”

While talking about the games being back, Ajay extended his support to his friend, BajrangPunia, who is representing India in the final week of the Tokyo 2020 Olympics. He said “Sportspersonsrepresenting their countries in Tokyo Olympics are best in their games and the entire nation is hoping for medals from them. I have a lot of hopes fromBajrangPunia and he will surely bring a gold medal to India. He is my close friend and we are in regular touch. I’ve attended a number of camps with him and after seeing his hard work and dedication, I believe he will grab a gold medal.”

The Indian Kabaddi captain grew up in a sporting environment and knew he had to fulfill his father’s dream of representing the country at an international level. Belonging to a middle-class family, having a job was a necessity for Ajay and to get to secure one through a newly recognized sport was just the right opportunity for him.“Kabaddi was recognized internationally before I was born and my dad was aware of the sporting culture. As there was a job quota fixed according to the level you play at. We belonged to a middle-class family and having a secure job was a dream for us. So basically I started playing to get a job through the sports quota.”

But his journey took another turn wherein his dream to get a job was overtaken by the love and passion for the sport, as he talks about his journey along with the growth of the sport on SportTiger’s special interview series“Mission Gold”. He said, “During this journey, my passion grew for kabaddi so much that I just wanted to play the sport. I got job offers from the Indian Army, ONGC and more but I rejected them because I wanted to reach a level in Kabaddi where I could become an Arjuna Awardee.”

The rise and rise of Pro-kabaddi has been the talk of the town since the first season and the 2016 Kabaddi World Cup winner didn’t back off while praising the league as it has helped in the recognition of sport as well as the players to which he quoted, “The standard of kabaddi that we know of today and the kabaddi players that world knows about it because of the Pro Kabaddi league. We used to play internationally as well prior to PKL and people were totally unaware about us and the sport but now if we got anywhere in the country people try to recognize us and that’s because of the league.

He further added, “Through PKL there are many opportunities given to the players as it was before. Earlier people used to take Kabaddi as a local game but now people ask us to play in PKL as they enjoy watching us play on such a grand level and know that whoever plays PKL is a top-class Kabbadi player.”

But as the pandemic hit, the strict lockdown took a toll on the fitness level of the players, Ajay shared his experience and said, “There was a huge impact on our fitness as gym, grounds everything was closed and the biggest problem for a player was to stay fit because our meals are usually very heavy and most of us saw a gain in our weight. I was on my police duty and had to be on the front line throughout which got a little tough to handle. But now we are gradually getting our form back and working on our fitness.”

Now as the sporting activities are gradually resuming, Ajay remains positive that Kabaddi will also be back in the coming days. The 2014 Asian Games gold medalist said, “Kabaddi is an intense contact sport and hence, there are more chances to get infected. The Association and the management are in regular touch with players, checking their fitness levels and recently they have also organized online classes. As soon as they start realizing that the condition of COVID is improving, they will restart the competitions. They know how players are getting bored at their homes and are also constantly working on improving their fitness.”