Historic First: Conservative Islamist United Arab List (Raam) To Be A Part Of The Ruling Coalition

8 Parties From Across The Political Spectrum – From Left To Ultra Nationalist, Including Seculars And Arab Muslim - Reach Agreement To Enter Into A Coalition To Form The New Israeli Government

As a pre-election ploy, Netanyahu used a tried-and-tested module used by many right-wingers across the world, where nationalist agendas are fueled by clashes between two ethnicities. The latest flare-up in Israel is viewed by many with the same intent 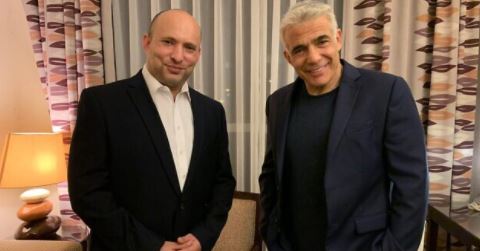 In a bid to give Israel a new government without having to resort to its 5th elections in just over two years and to boot out Benjamin Netanyahu from the Prime Minister’s seat after his 12 year reign, an unlikeliest coalition of parties has been stitched together.

After Netanyahu yet again failed to form a government, Yair Lapid was given 4 weeks to cobble up a coalition. Hours before the deadline, Yesh Atid leader Yair Lapid announced that he had already informed the Israeli President Reuven Rivlin of the agreement.

"I pledge that this government will work in the service of all Israeli citizens, those who voted for it and those who did not. It will respect its opponents and do everything in its power to unite and connect all parts of Israeli society," said Yair Lapid.

As a part of the rotational deal, Yamina chief Naftali Bennett will become the next Prime Minister for two years followed by Yair Lapid for the rest of the tenure.

Bennet further added, “It’s the easiest thing to entrench yourself in every promise, if everyone did that no government would have been formed, and it happened after four elections. I knew I was going to be criticized, and in the choice between what’s good for Israel and this thing, I chose what’s good for Israel.”

Even though Israel has a 21-percent Palestinian minority, in a historic first a Conservative Islamist political entity, United Arab List (Raam) will be a part of the ruling coalition in Israel.

After signing the agreement Mansour Abbas of United Arab List (Raam) told, "The decision was hard and there were several disputes but it was important to reach agreements." He said that there were "many things in this agreement for the benefit of Arab society."

However, it is important to note that the possibility of a fresh election looms if this coalition fails to prove its majority in the 120-member Knesset which it will try in a week’s time. Netanyahu in the meanwhile, is trying his best to derail the coalition. In fact, he seemed to have instigated Yamina leader MK Nir Orbach on second guessing openly.

Netanyahu’s anxiety is not only based on his losing his Prime Ministership but also because of his fear that charges of fraud, breach of trust and accepting bribes may be brought up in the Courts and he might lose and be put behind the bars.

Many Middle-East experts point out that the Israeli government’s latest acts of use of excessive force in Shiekh Jarrah, followed by storming of Al Aqsa mosque and the later bombings of Gaza (even if it was presented as a retaliatory action) was a strategy to polarise the Israeli society by Netanyahu, after all his efforts to stitch up a coalition came to naught.

As a pre-election ploy, he used a tried-and-tested module used by many right-wing politicians across the world from Brazil to USA to Poland, not forgetting Turkey and India, where nationalist agendas are fueled by clashes between two ethnicities where the chasm is so huge that even those who try to create bridges are scorched or singed. The latest flare-up in Israel is viewed by many with the same intent.

It is imperative to point out here that in quick succession the world is seeing two major poster boys of right-wing politics – Trump and Netanyahu - fading into the sunset, with major upheavals in Brazil, they might soon be joined by Jair Bolsonaro.