Experts believe that tigers frequent this stretch of road in Tadoba, and that authorities must take precautions to prevent such incidents. 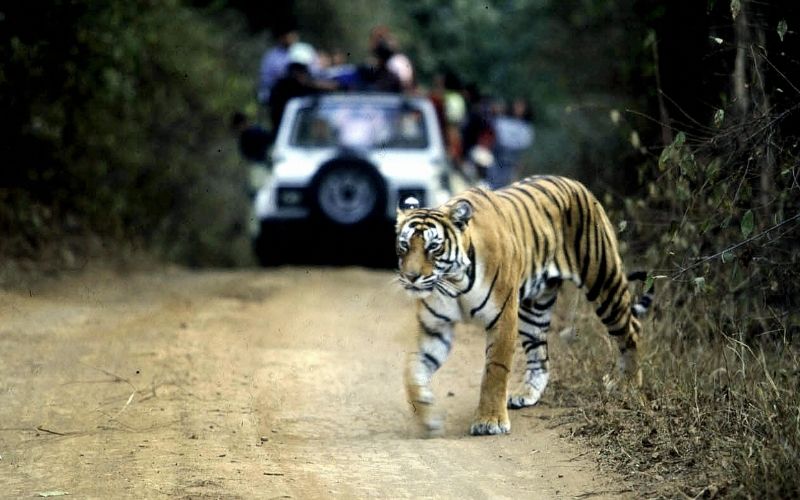 Walking on the road, two majestic tigers are roaming in a wildlife sanctuary. Doesn't this sight appear to be surreal? However, if those big cats are crowded with a mob of negligent humans, it might look unpleasant, right? A similar act of idiocy was recently witnessed in a Maharashtra sanctuary, arousing the ire of wildlife environmentalists and animal lovers.

In a widely circulated video on social media on Monday, two tigers can be seen wandering on the Padmapur-Moharli road, which runs alongside the Tadoba Andhari Tiger Reserve. Regardless of the two tigers prowling along the tar road came quite close to them, numerous bikers taking photographs with horns screaming in the backdrop. While others turned around and moved back a short distance, one of the riders, identified as Arvind Banda, remained still and only pushed back his idling motorcycle a few feet once the tigers got too near.

A few of the men venture closer for a better shot in an attempt of "daredevilry," only to quickly make a retreat as the two big cats approach.

Sarosh Lodhi, a conservation photographer and member of CLaW, a Maharashtra-based independent forum of wildlife enthusiasts, was stunned.

Experts believe that tigers frequent this stretch of road in Tadoba, and that authorities must take precautions to prevent such incidents.

“Wild animal movement is a common occurrence in villages surrounding parks. On the mentioned route, tigers have been observed several times. The problem is the throng and the close proximity in which they are filming. To avoid any unforeseen incidence, rigorous monitoring of this patch is the only option.”

Wildlife activist, Bandu Dhotre, took to social media to express his exasperation. He said, “Such incidents cannot be taken lightly, a big accident can happen anytime, even when there is a lockdown, where and why are so many urban bikers going to Chandrapur: This viral video of Padmapur-Moharli road.”

Taking a serious note of the viral video, On Monday, the Tadoba Andhari Tiger Reserve (TATR) administration issued four commuters show-cause letters for breaking wildlife regulations and hindering the movement of two tigers roaming along Padmapur-Moharli Road. They have been given two days to submit their comments or face legal action under the Wildlife Protection Act.

Commuters were observed shooting film of tigers from close range and disrupting their natural prowling path, causing them to move away, according to the notice. The recipients are being given two days to respond in writing at the RFO Moharli office or face legal action under Section 9 of the Wildlife Protection Act, 1972.

The amount of traffic on the Padmapur-Moharli Road has risen significantly, resulting in several incidences of wildlife disturbance. In recent months, two incidents on the road resulted in the deaths of a leopard and a spotted deer.

With as much wildlife as the Tadoba core zone, Moharli forest has always been a draw for free safaris. Many young people take time off and go for a ride down the smooth road, often consuming alcohol along the way. Despite efforts to prevent such invaders by hiking admission fees at Padmapur gate, the TATR administration has been unable to put a stop to the commotion.