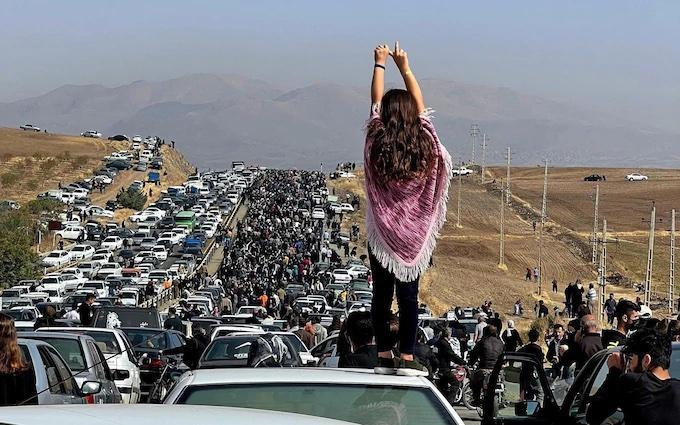 Iran’s Court has sentenced an anti-government protester to death and handed down jail terms to five others, state media said Sunday, amid persistent unrest in the country.

Protestors in thousands continue to gather across Iran as nationwide protests continue. The protests have been going on for over two months now, which began after 22-year-old Mahsa Amini died on September 16, 2022, following her arrest in the capital, Tehran, for allegedly violating Iran’s hijab law.

Acting on the impositions of the Iranian parliamentarians to impose stricter punishments on the protesters and to teach them an “important lesson”, the Iranian Parliament approved the death penalty for approximately 15,000 people with 227 votes out of a total of 290 members.

“We, the representatives of this nation, ask all state officials, including the Judiciary, to treat those, who waged war (against the Islamic establishment) and attacked people’s life and property like the Daesh (terrorists), in a way that would serve as a good lesson in the shortest possible time,” said an open letter signed by parliamentarians.

The lawmakers further added that punishment would "prove to all that life, property, security and honor of our dear people is a red line for this [Islamic] establishment and that it would show no leniency to anybody in this regard."

What's shocking and utterly disdainful is that among the arrested are hundreds of children - young girls fighting for their futures. Iran is one of the world's last countries to execute "juvenile offenders," with nine the age of criminal responsibility for girls, compared to 15 for boys.

But under Iranian law, you can't execute a minor if they're a virgin.

As per the reports by the BBC and Guardian, that roadblock has been solved in the past by marrying the girls off to prison guards to be raped the night before their murders - a practice that's been documented over the decades by journalists, families, activists and even a former leader.

As per Journalist Tina Yazdani, "An estimated 14,000 innocent protesters, fighting for basic freedoms, are facing the death penalty in Iran. Mostly teens & young adults, students, lawyers, journalists, and civil society activists. This is a mass execution."

Canada Government said, "Canada strongly condemns the Iranian regime’s decision to impose the death penalty on some arbitrarily detained protesters. We urge the regime to reverse course. These trials and sentences are clearly designed to intimidate Iranians as they fight for their human rights."