A significant increase in China's nuclear assets has been detected, indicating that Beijing claims it has emerged on the world stage and is ready to negotiate on equal terms with the US. 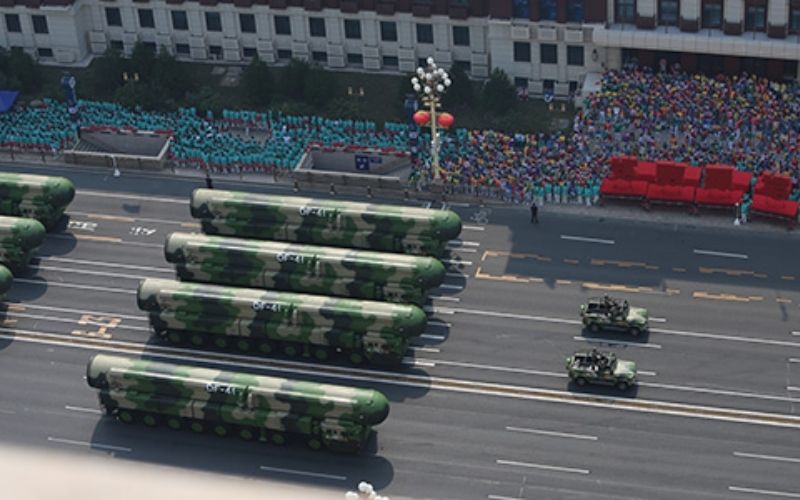 A significant increase in China's nuclear assets has been detected, indicating that Beijing claims it has emerged on the world stage and is ready to negotiate on equal terms with the US.

An American non-proliferation think tank has discovered roughly 120 new intercontinental ballistic missile silos in a desert near the northwestern city of Yumen in Gansu province, in what may be a huge increase in the country's nuclear arsenal.

According to researchers at the James Martin Center for Nonproliferation Studies in Monterey, California, China is believed to have a modest stockpile of 250-350 nuclear weapons - only about one-twentieth of what the US currently has - and the construction of 120+ new missile silos would represent a historic shift.

Researchers recognised that the real number of additional missiles destined for those silos is unknown, and that they could even be decoy silos similar to those deployed by the US to trick or confuse Cold War rivals. However, they claim that 119 almost identical building sites have elements similar to those observed at existing launch stations, and that the new silos indicate a massive attempt to boost the credibility of China's nuclear deterrence.

"When the silos under construction at other sites across China are included, the total number of silos under construction comes to about 145. We believe China is growing its nuclear weapons in part to retain a deterrent capable of withstanding a US first strike in sufficient numbers to overwhelm US missile defences,” said Jeffrey Lewis, the Center's specialist on China's nuclear arsenal and director of the East Asia Nonproliferation Program.

He suspects the silos are for a Chinese intercontinental ballistic missile (ICBM) known as the DF-41, which can carry several warheads and approach the US mainland. The news came on the day before of China's President Xi Jinping's address to the nation at a gala to commemorate the centennial of the ruling Communist Party, in which he said Beijing would no longer be bullied by foreign powers and would not accept "sanctimonious teachings from those who feel they're entitled to teach us."

Anyone intending to do so would be “on a collision course with a huge wall of steel built by over 1.4 billion people,” Xi stated, without naming any rivals but amid rising tensions with the United States.

Even though the United States has long suspected it had the measure of China's modest nuclear arsenal due to its own massive numbers and technological superiority, American planners have recently expressed concern about Beijing's "breathtaking expansion" of its arsenal, including the addition of new nuclear-weapons-capable submarines to its fleet.

The modifications to China's nuclear arsenal, or perhaps it's posturing in this area, come on the heels of Beijing flexing economic power on the back of manufacturing-driven development, which has unnerved the US.

Following the crackdown on the cryptocurrency Bitcoin, China unveiled a "digital yuan," an electronic version of its money, earlier this week, in what many experts regarded as an emerging challenge to the US dollar's standing as the world reserve currency.