Savita is nominated for the FIH Women's Goalkeeper of the Year award following her exploits at the Tokyo Olympics. 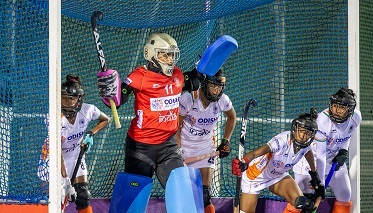 New Delhi: The Women's Hockey Team may have returned home without a medal, but they surely won the nation's heart and accolades from fans around the globe. The team's resilience to bounce back from a series of losses in the league stage to beat Ireland (1-0) and South Africa (4-3) changed the course of the Games for them. Making it to the quarter final was the team's first priority and getting past the mighty Australians 1-0 in the first knockout game ensured the entire nation rallied behind them ahead of the Semifinal clash against Argentina women.

Looking back at the turn of events, Indian Women's Hockey goalkeeper Savita expressed, "Now that I have finally had some time to reflect on our performance, I do feel we achieved something outstanding, and the best part was the journey to get till here over the past five years. We have endured a lot as a team and as individuals faced tremendous odds to reach this level. I think we will always cherish this journey."

"Though we lost very closely to Argentina in the Semifinals, we wanted to give our everything against Great Britain and we really wanted that medal around our necks and after beating Australia, we really believed this was achievable," added Savita who is nominated for the FIH Women's Goalkeeper of the Year award. She is nominated alongside Argentina's Belen Succi and Great Britain's Maddie Hinch.

The sight of Savita breaking into tears while team's Analytical Coach Janneke Schopman comforted the experienced goalkeeper after the team lost the Bronze Medal to Great Britain had the entire nation feel for the team who were regarded as the underdogs of the tournament. They had finished 12th in Rio Olympics, and few had expected them to be medal contenders in Tokyo. "But now I feel the expectations will grow. People have seen that we can perform at top tournaments, and I believe we can live up to these expectations. We now have the experience, and the team is poised to achieve bigger feats. The experience in Rio made us believe in ourselves and we really worked hard to get to this level, now we will work on taking it to the next level," she added.

With the current Olympic cycle spanning just three years, Savita says the team's priority will be to regroup, analyze the Olympics and hit the ground running for the calendar in 2022 which features the Commonwealth Games and the Asian Games. "I actually can't wait to return to camp in SAI, Bengaluru. It has become a place of comfort for us. There has been lot of celebrations following the Olympics and now it's time to get back to reality. Next year is crucial with the Asian Games and our priority will be to win Gold so we automatically qualify for the Paris Olympics. We will resume training with that target in mind," she concluded.