Indian fan enters field with a tricolor in hand, Started crying after reaching close to Rohit Sharma, Imposed A Fine of 6.50 Lakh

During India vs Zimbabwe match, an Indian fan was forced to enter the field. 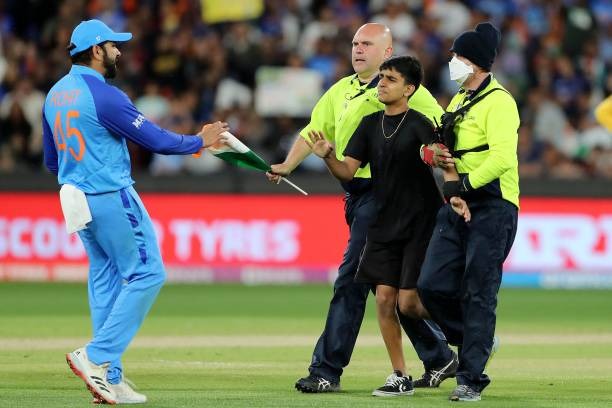 During India vs Zimbabwe match, an Indian fan was forced to enter the field. He will now have to pay a fine of Rs 6.50 lakh. Actually, this incident is of the 17th over. When Hardik Pandya was bowling the 5th ball, then this boy entered the field and reached directly to Rohit Sharma. She was seen crying.

The security guards caught hold of him on the ground and started dragging him. Then Rohit asked to take them out comfortably. The match was halted for some time. Not much information could be found about this fan yet. In this match, India defeated Zimbabwe by 71 runs. With this win, Team India made it to the semi-finals.

You must have seen the fans forcibly entering the ground. Usually, in such incidents, the security guards catch that fan and throw him out of the field, but this is a rare case of imposing a fine on the fan. Although this is normal in Australia, the MCG management has made it public for the first time.

The fine amount was also displayed on the large scoreboard of the Melbourne Cricket Stadium. A young fan has been fined for obstructing the security of the ground. Social media fans have raised questions on this. Some social fans wrote- 'How will the youth pay such a heavy fine.'

ICC monitors such incidents. BCCI panel umpire Rajeev Risodkar explains that minus points are awarded to the host ground in the event of a security break. After three consecutive incidents that ground is banned. He believes that such incidents should not happen during international matches. Such incidents raise questions about the safety of the entire competition. Recalling the incident of Indore, he says that we (MPCA) also had to answer to BCCI.