16-year-old Indian-American Sia Parikh walks the Red Carpet at Cannes, becomes a trend setter and how! 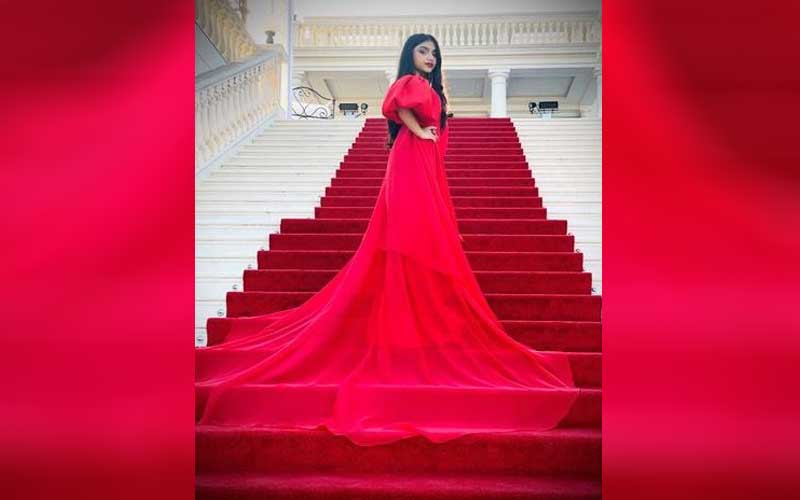 I often pick stories that stands nowhere in the messy socio-political surroundings today. Amid all that, I find people who work hard, overcoming their long-reared complexes, and achieve what they call feat in their own domain. One such example is a 16-year-old girl namely Sia Parikh.

So, why am I writing about her? Here is the reason.

She is one short-heighted girl, who stood tall at Cannes and got body shamers drowned in ignominy. The 16-year-old Indian American Sia Parikh has become a trend setter at Cannes, by, if you please, becoming, perhaps, the shortest girl to walk the Red Carpet at Cannes in the ongoing Global Short Film Festival, that conclude today.  For a non-professional model, and just a young school student, it is quite a feat.

AT AN UNACHIEVABLE HEIGHT- SIA PARIKH

She wore the famous global fashion designer Andres Aquino’s creation, a flowing red gown and became photographer’s delight at the ‘Global Short Film Awards Gala’ as the event is named. She also adorned a La Anjali Phougat’s creation at the ramp at the Red Carpet.

At 4’ 11” is perhaps the shortest girl to walk the ramp among girls as tall as 6 feet,.

Sia is a classic example of the famous adage “If life throws lemons at you, make lemonade out of it”.

In an answer to our question, she said, “Yes, I was the shortest at Cannes, perhaps the youngest too. Walking the ramp at this age and height has given me immense confidence. But, I have earned it after overcoming the slurs such as “Shortie” and “Midget” from my peers. I thought I would rather change this complex bestowed upon me to an achievement”.

So, who actually is Sia Parikh? Is walking the ramp her only achievement? Let us know about the girl who has been an attention at the Cannes. Her pictures are slowly going viral at US and India.

This dusky, average-looking child was born to an immigrant family of Gujarat, Vadodara to an IT Professional Ashish Parikh and Photographer and social worker mother Sheetal Patel Parikh. She is a high school student at Olentangy Orange high school, USA Ohio.

Often mocked at for her short height, she turned it into a motivation for herself. She learnt Kathak, modelled for fashion designer Anjali Phougat, participated in cultural events and received trophies and accolades and started doing a lot of community service beyond the school course.

This boosted her morale and when her photographer mother shared her pictures with Anjali Phougat who made her a model for her creations, the globally known fashion designer Andres Aquino saw her, and decided to pick her up for walking the ramp at the ongoing Global Short Film Awards Gala at Cannes. And that’s her current story that made her stand tall at the arch lights at the global fashion and glamour world.

LONG AND SHORT OF LIFE , AT ONE LEVEL AT THE CANNES, SIA PARILH THE YOUNGEST, CUTEST AND THE SHORTEST AT CANNES

Walking down the memory lane, she recalls, “When I was younger I used to be amongst the tallest in my peers, however, by the time I reached middle school, height-wise others shot up more. Initially I wasn’t bothered about it but with time being called ‘short’ a lot hurt me. I was constantly thinking about my body and if I was doing something wrong, or if there was something wrong with me. I couldn’t concentrate on my studies as I would be name-called ‘shortie’ and people would stand next to me and rest their arm on my head. In social media as well including Instagram my comment box increasingly got comments like “shortie” and “midget” upsetting me further.”

But rather than being bogged down with this, she realized that height was “just a mark on the scale and it will never be a constraint to my dreams. Instead, it helped me become more focused on what I wanted to achieve. I still work in the fashion industry, practice my dance and will surely make my mark as an actress.”

So, did she face the same treatment at Cannes, being among the girls who are taller to her?

“Well, sort of, but, in a good sense,” as there is a camaraderie over there. She says. “There were funny episodes like if some came from outside when all models were there, they would come to me and suggest, “Sweety please wear your heels…” even though I was wearing one. Soon as they realize they would hug me or we would all laugh it out. So, no, I didn’t feel anything negative. Also as I was very young, so they treated me nicely.”

Walking the ramp at Cannes is considered a huge achievement globally in the glamour and fashion world. So, this feat for her has made her think about the young mind like her who feel low due to their skin colour or height.

She says, “In the era of Social media many young minds like me get affected and feel low. With this opportunity, I would like to spread awareness among teenagers that everyone is unique and beautiful and our outer look should not limit us in anything we want to contribute to our society.”

Now, along with her studies she devotes time learning Kathak and has successfully participated in various dramatics, acting classes in LA, Chicago and Vadodara, dramatics as well at school.

Not limiting herself to just art, culture and fashion, Sia says, from a very young age, she had started contributing to society by participating in community services. She is an assistant to teacher in religious classes and also a part of Indian Women Collaboration. With Sneh Foundation in India, she was a volunteer in feeding and helping underprivileged children. She has also raised a handsome amount (around $1000) for a hospital lab in Nasvadi,  Gujarat to support the underprivileged villagers there.

Sia was born in Cleveland and raised in Columbus Ohio (USA). Both her parents are social contributors too. Migrated from Gujarat, the family is known to have earned a huge respect in USA and India for their contribution to society and their work and passion for Indian Culture.

Whatever happens in the world, the glamour and fashion world, like a necessary evil, will never experience a cease. Therefore, those aspirants looking up at this world for their career, has her as an example, thus, body shamers have to bow down and slowly vanish.

Completely overcoming the complexes of her outwardly appearance, Sia is now continuing on the path of “Inner growth” as she puts it. So, these days, She is participating in many global events, networking platforms, socio-cultural gatherings and is active on social media to gather and spread knowledge and be an influencer in her own way.

Now my mission is “'Raise Yourself To Help Mankind', she asserts. Well! Worthy for her and many drowned in worthless complexes in the cruel world.

SIA PARIKH WHO LOOKS SO INNOCENT AT 16, HAS A MATURE MIND. AT CANNES