India is all set for Tokyo Olympics, will be sending a 228-strong Contingent, Including 119 Athletes

This Tokyo Olympics will be India's 25th appearance at the quadrennial event, which will be held from July 24 to August 8. India will send the biggest contingent ever, with 126 athletes competing in 18 sports. 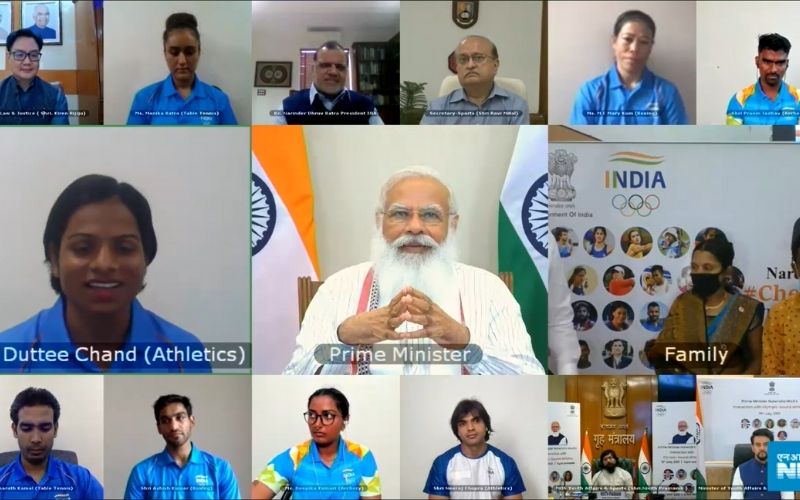 Screenshot from the virtual interation of PM Narendra Modi with India's Olympic athletes.

As per IOA President Narinder Batra, India will send a 228-person delegation to the Tokyo Olympics, including 119 athletes. During Prime Minister Narendra Modi's interaction with Olympic-bound athletes, Batra stated that 67 of the 119 athletes are male and 52 are female.

“India will have a total of 228 athletes competing in the Tokyo Olympics. There will be 67 male and 52 female competitors." In the virtual interaction with athletes, Batra stated, "We are fighting for 85 medal events."

Indeed, this will be India's largest Olympic delegation in history.

“On July 17, the first contingent will depart for Tokyo. In total there will be 90 athletes and officials.”

Backstories of struggle, sacrifice, and tenacity highlighted Prime Minister Narendra Modi's engagement with India's Olympic athletes, during which he urged them to set aside expectations and focus solely on giving their best in Tokyo.

Prime Minister Narendra Modi wished India's Olympic-bound athletes success ahead of their departure for the Games on Tuesday, saying the entire nation is rooting for them to shine on sport's grandest stage.

PM Modi's dialogues, well informed of their preparations and formative years, touched on the making of their success stories as well as some amusing topics.

“Don't get weighed down by expectations; just do your best,” PM Modi advised during the meeting.

The Olympics, which will not allow on-site spectators because of the COVID-19 outbreak, are set to take place in Japan's capital from July 23 to August 8.

Furthermore, during the interactive session, Anurag Thakur, the newly appointed Union Sports Minister, and his deputy Nisith Pramanik, as well as law minister Kiren Rijiju, who was succeeded by Thakur, were present.

In addition to this, the PM also lauded the government's Khelo India project for its contribution.