India is no longer Ram Bharose. It’s on ‘Corona Devi’ (goddess) bharose. Indian peoples’ belief of respite from Corona by an ‘idol’ and not by medical machinery, becomes official now. 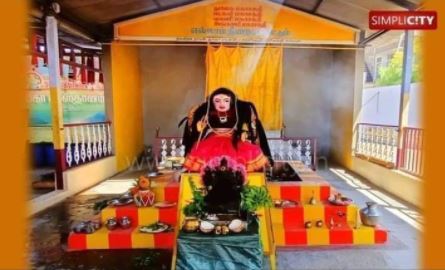 Almost one-and-half years ago when news on Covid and the disease itself was in the process of making its official entry in the country (thanks to Namaste Trump, Horse trading of Madhya Pradesh MLAs, etc), my eyes were caught by a video in which some 50 women, with pallu (cover) over their heads, had gathered at a home . These naïve women sang praises of "Corona Devi” and asked her to leave their homes.

The Corona song was penned seemingly by someone from Rajasthan, as it says that they eat Bajra rotis with ghee (specific to this region) and are vegetarians (!), reasons enough for Corona not to stay at their homes! The lyrics was perhaps passed on to all the other women who were singing it, by reading it from their mobiles. By the way, the song indicates that Corona should not touch vegetarians who take care of their animals!

When I posted it on my Facebook wall, all saner minds were shocked and asked me if it was for real or was it a scene from a film!

It was followed by several Bhojpuri devotional songs praying to God for taking away Corona. Like this one.

Cut to today, and we see the country's second ‘Corona Temple’ in Coimbatore, while the first one was started in Kerala almost a year ago. The Kerala Corona Devi temple was created by a devotee in Kadakal who had attached it to his home. The idea has been lapped by a Tamil Nadu devotee this year.

So, the new temple in Tamil Nadu has a brand new consecrated ‘Corona Devi’ idol. It will hold special prayers for two days – by performing a maha-yagya (worship of long duration to appease gods). It is built to protect humans from the pandemic, its priest and founder states on record. However, it is not open to public yet due to Corona-induced lockdown in the state.

Now, what does this new Corona Devi Temple signify?

While some really naïve ones like the women singing aarti (prayer) mentioned above, making of Corona Temple induces many brain-wracking thoughts, and even dangerous schemes.

Pagan rituals which crept into the Hindu religion, created a fertile ground for worshipping anything that scared them. If there was inaccessible rain, they started worshipping it. He became Indra Dev (God of rain), when snakes frightened them, they began worshipping it too. It became a naag devta. (The snake God). (Bollywood really took several leaves from this idea and enthralled (?) us with movies on snake Gods, and snake pairs who have Godly power to change their form from snake to humans and, more). So, fear was the base for worshipping and crafting idols to worship.

What was Maha Kumbh anyway? It was a maha yagya of to please the God to save us from corona this year, instead of strengthening and creating new medical systems! This is what the ruling government actually has capitalised on – fear of God’s wrath!

The creation of a Corona Devi temple at TN also suggests that the people/devotees have stopped believing that a human being or governmental machinery can do anything to stop this God-sent disease. With a totally failed and collapsed medical system, artificial depravation of government funds (it spends Rs.20,000 crores on Central Vista and not even a comparable amount on availability of oxygen, plasma and vaccination!) The public has understood that they are now bhagwaan bharose (dependent) and not Ram Bharose, anymore! So erecting a temple seems a good idea.

Now, I feel the same era has come back, when people have started worshipping the thing that terrified them instead of researching on it and finding a logical solution.  By the way, this also helps the current government in disguise, as much as to take an escape route for not spending money on protection from the pandemic. Loss of logic is this government’s delight anyway!

So, the superstitions that was a part of ancient India has made an official come back!

Imagine, if we have such mushrooming Corona Devi temples across India, at least till the time the reigning political machinery does not object on it, say next elections, and next to next?; then what a nice occupation it would be for a jobless India? These temples would effortlessly turn into grand money-minting spaces. For lack of work and money, more religious groups may follow suit – Corona taveez, vaccination amulet, plasma shrine, et al.

Instead of questioning our crumbled health systems; the only option we would have is pray to God and moan in soliloquy, in solitude.

And hey! What a misogyny!

How come Corona is female and not a male; a Devi and not a ‘Dev.’?

Oho! Apologies, as usual, you are strengthening a woman, right? By worshipping her? Remember small pox is still called ‘maata’ (goddess) in pockets of rural India! Undignifying her in real life, notwithstanding! (Refer to a horrible government and non-government data on this).

I think people like me are done in current India!

The only things that ignites some hope in me is, that both Kerala and Tamil Nadu, temple states of the country, did not vote for the BJP and its saffron agenda in the just-concluded Assembly elections!