In reply, England with 120 for no loss has taken the lead of 42 runs. India entered the third Test match with a 1-0 lead in the five-match series. Captain Virat Kohli won the toss and elected to bat first. His decision totally backfired as no Indian batsmen could score even 20 runs. Fast bowlers James Anderson and Craig Overton took three wickets each. 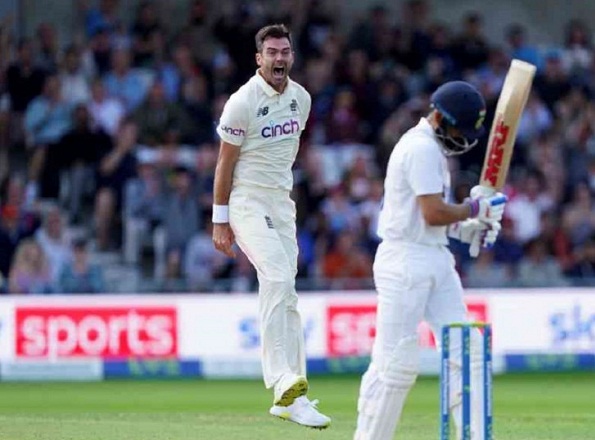 Headingley, Leeds: This is believable, that India was all-out for 78 runs in the first innings, but this is unbelievable that ‘HITMAN’ Rohit Sharma top-scored with 19 runs in 105 balls! The two Fast bowlers James Anderson and Craig Overton, picked three wickets each as England bundled out Indian innings in just 40.4 overs here on Wednesday, the first day of the third cricket Test match. In reply, at the end of the day's play, England was 120 for no loss and got the lead of 42 runs with both openers were batting confidently. Rory Burns (not out 52) and Haseeb Hameed (not out 60) were looking solid at the crease.

India entered this Test match with a 1-0 lead in the five-match series. Captain Virat Kohli won the toss and elected to bat first. His decision totally backfired as K L Rahul, who was player of the match with a brilliant century at Lord’s, got out for a duck in the very first over of the day. James Anderson once again showed his class and dismissed Rahul (00), Cheteshwar Pujara (1) and Virat Kohli (7) in the same manner, caught by wicketkeeper Jos Buttler, in the very first hour. India was tottering 21/3 in 11 overs.

Ajinkya Rahane (18) was the second-highest scorer of the innings. Anderson finished with figures of 3/6 in 8 overs and at lunch, India was 56/4 but their fortunes did not change and the team was back to the dressing room for 78. Sam Curran and Ollie Robinson took two wickets each to provide able support to James Anderson and Craig Overton. Off-spinner Moeen Ali was the only English bowler who could not take any wicket.