In support of farmers protest, Navjot Sidhu hoists a black flag over his house

The fact that Sidhu is waving the flag from Patiala comes so soon after his public feud with Chief Minister Captain Amarinder Singh, who had dared the cricketer-turned-politician to compete from the city deemed to be Singh's stronghold. 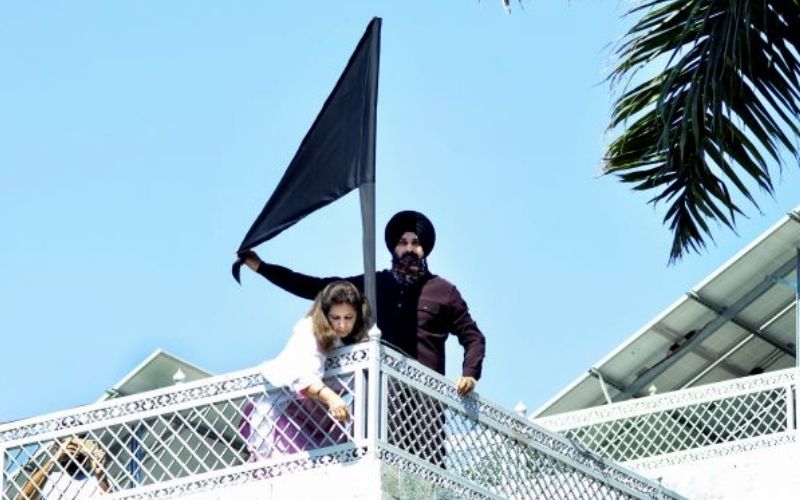 Congress MLA and former Punjab minister Navjot Singh Sidhu hoisted a black flag outside his ancestral home in Patiala on Tuesday to show his support for the farmers' protest. The fact that Sidhu is waving the flag from Patiala comes so soon after his public feud with Chief Minister Captain Amarinder Singh, who had dared the cricketer-turned-politician to compete from the city deemed to be Singh's stronghold.

The black flag is a mark of rejection of farm laws, claimed the MLA who was accompanied by his wife. According to him, the Punjab government must give an alternative means of MSP and procurement assurance.

Later on, Sidhu called all Punjabis to support farmers in a social media post.

Moreover, his daughter Rabia also raised a flag at their Amritsar home.

His call for residents in Patiala to fly black flags was received with a mixed response, as a few individuals came out to raise black flags on their homes.

Sidhu has shifted his attention from Amritsar to Patiala, his birthplace, in the last six months. He has been throwing salvos at Amarinder Singh from Patiala on a variety of problems, including the desecration of the Sikh holy book, the land and sand mafia, and the drug cartel.

On the other hand, a farmer from Sanaur says that “We are aware that Navjot Sidhu is voicing farmer concerns, however, he should come out in the open rather than relying solely on social media to do so. If someone is sincere about a cause, they must back up their words with action.”

”This is a decisive battle for farmers, and we will not follow any politician, instead choose to follow our union leaders only."

Further, the news comes a day after Punjab Chief Minister Captain Amarinder Singh urged farmers not to stage a three-day demonstration in Patiala, claiming that doing so will result in a raise in Covid-19 cases, while also expressing his sympathy for their movement against the disputed farm laws.