In the IMF annual World Economic Outlook, released ahead of the World Bank's annual Spring meeting, the global financial institution predicted that the Indian economy would grow by 6.9% in 2022. 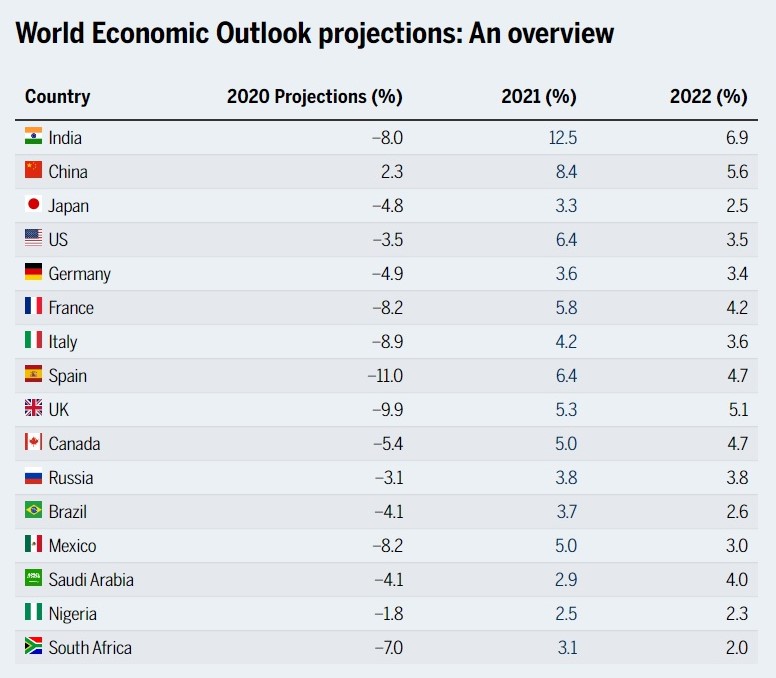 The International Monetary Fund (IMF) predicted an effective 12.5% growth rate for India in 2021, higher than China, the only major economy to have a positive growth rate during the Covid-19 pandemic last year.

In its annual World Economic Outlook, released ahead of the World Bank's annual Spring meeting, the global financial institution predicted that the Indian economy would grow by 6.9% in 2022.

Notably, the economy contracted by a record 8% in 2020, according to the IMF, which forecasted an impressive 12.5% growth rate for the country in 2021.

The contraction for 2020 is 1.1 percentage points lower than estimated in the October 2020 World Economic Outlook (WEO), indicating higher-than-expected growth out-turns in most regions in the second half of the year after lockdowns were relaxed and economies adapted to new ways of working.

The projections for 2021 and 2022 are 0.8 percentage point and 0.2 percentage point higher than in the October 2020 WEO, respectively, reflecting additional fiscal support in a few large economies and the expected vaccine-powered recovery in the second half of the year, as per the report.

Over the medium term, global growth is expected to slow to 3.3%, reflecting projected damage to supply potential and forces that predate the pandemic, such as ageing-related slower labour force growth in advanced economies and some emerging market economies.

Gopinath stated in a blog post that the pandemic has yet to be annihilated and that COVID cases are increasing in many countries. Recoveries are also deviating dangerously across and within countries, she added, as economies with slower vaccine rollout, less policy support, and a reliance on tourism fare worse.

Gopinath went on to say that lawmakers will have to actively support their economies despite having less policy space and higher debt levels than before the pandemic.

Last year, the global economy shrank by 4.3%, more than twice as much as it did during the global financial crisis of 2009.