I had an 'unrealistic' dream, I wanted To Play Hockey: Lalremsiami 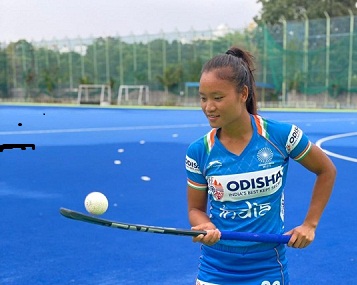 New Delhi: Lalremsiami Hmarzote is a member of the Indian women’s Hockey team who made history at the Tokyo Olympics after the team defeated World No. 3 and former gold medallists Australia, to make it to the semi-finals of the Olympic Games, for the first time ever.  In the Semi Final the Indian team lost to Great Britain but these hockey girls have won many hearts with their historic performance.

Here we have brought the struggle story of Lalremsiami in her words- “Papa was a farmer & would barely make Rs 250, Mumma was a housewife & took care of 7 siblings–we studied in a government school. I was 11 when I realized I needed to provide for my family, but I had an ‘unrealistic’ dream–I wanted to play hockey. Mumma was a football player when she was young & encouraged us to take up sports, but the nearest hockey academy was 84 km away. The cost to travel there was more than Papa’s daily income. Still, I convinced my parents to allow me to train; they said, ‘We don’t have the money.’ But when I found out that the academy didn’t charge any fees, they agreed to take me.

I was selected by the academy; whilst leaving, Papa said, ‘Enjoy doing what you love!’ Living without my family was difficult & I only met them for Christmas. But it was tougher on them; people would tell my family, ‘Your daughter could’ve stayed back & provided for the family!’ My family never said anything, but I felt terrible. I promised them, ‘One day I’m going to wear that blue jersey & give you everything!’ That made me train harder!

And my parents went above & beyond for me; I once needed Papa’s signature to play a tournament. He would have had to spend all his daily earnings to reach me, but he still came!

Soon, I moved to Delhi to be part of the junior national team. I was conscious of my Hindi, but my teammates encouraged me to speak during team meetings. I was able to express myself on the field too; I broke into the senior national side & helped India win the Asia Cup! But last year, a day before India’s semi final match versus Chile, Papa passed away; I was devastated. But I decided to stay back–that’s what Papa would have wanted. I gave it my all & helped India win! After the final whistle, I started crying; my teammates said, ‘Aapke Papa bahut khush hote!’ All I ever wanted was to make him proud of me. My biggest regret in life is that I couldn’t say goodbye to him. But an even bigger regret will be to not make him proud– so as the Tokyo Olympics nears, I have my eye set on the goal. I know Papa will be looking out for me on that field when I score the winning goal… for him, for my team, for my India!”