The tweet thankfully got screenshotted before the Twitter user took it down, which was later tweeted by KTR himself, who took the entire thing in a humourous vein. 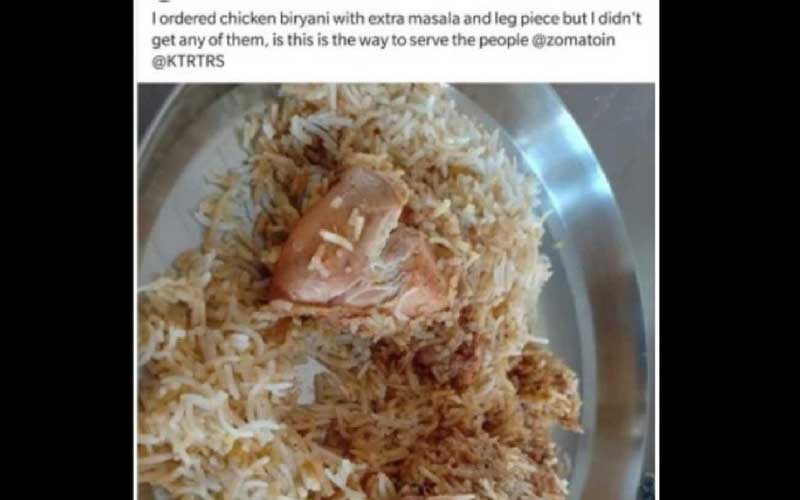 The second wave of infections has ravaged the entire nation, the circumstances have been such that the entire Indian society has been going through some of the worst times. However, one disgruntled Twitter being injected humour on the online landscape of India when he made sure his complaint was heard by the top-notch authorities.

The disappointed man was unhappy with the quality of his food which was home- delivered to him, he made sure to tag Zomato India as well as Municipal Administration and Urban Development Minister of Telangana K T Rama Rao.

The man in this now deleted tweet explained painfully how he had ordered a chicken biryani with ‘extra masala’ and ‘leg piece’ but none of these requests were met with the order he received. He frustratingly wrote, “Is this the way to serve the people? “

The tweet thankfully got screenshotted before the Twitter user took it down, which was later tweeted by KTR himself, who took the entire thing in a humourous vein.

This went viral with people making comments on it and making it a meme as well. KTR was a sport who replied to the Biryani lover jokingly.

The entire interaction was extremely hilarious and was a laughing stock on Twitter, reminding us to break a smile even in the tough times.