A BBC news presenter, well-dressed in a jacket and tie from the shoulders up explaining a report on coronavirus travel rules in front of the camera, forgot something else beneath — his pants — during a live broadcast. 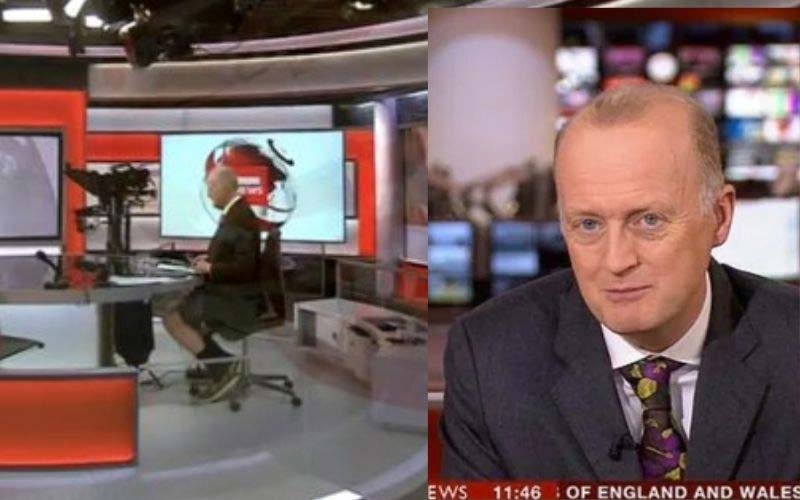 Who would have ever guessed that a polished TV host, dressed in a fine jacket and tie, would forget something else beneath — his pants — during a live broadcast? Yeah, that's what happened on BBC.

Shaun Ley, a BBC news presenter, was well-dressed in a jacket and tie from the shoulders up while explaining a report on coronavirus travel rules in front of the camera, but during the segment when the camera panned to another angle for a split second, and eagle-eyed viewers got a glimpse of him wearing shorts and summer shoes under the desk.

Soon followed a flood of videos and screenshots from the episode, all pointing to the gaffe, accompanied by hilarious comments.

Although many laughed at this incident, few defended the broadcaster saying that: “It's hot today in London (where Broadcasting House, which is where their newsroom is located), that's why he's wearing shorts.”

However, this isn't the first time the pandemic has resulted in a mishap. and a similar scenario occurred Last year when an ABC News reporter named Will Reeve appeared on the show "Good Morning America" for a segment regarding pharmacies employing drones to deliver prescriptions to patients. Reeve put on a great suit for the live show, but somehow he missed something important underneath – his pants.

At first glance, he appeared to be wearing a complete suit, but viewers quickly noticed that he had no pants underneath his suit jacket. And a minor flaw in the camera angle setup revealed it all!

Nevertheless, the anchor took the incident in a positive light. On social media, he wrote: "When WFH goes wrong (or, your self-framed live shot goes too wide). Hope everyone got a much-needed laugh(sic)"

Another mishap that has piqued the interest of social media users occurred when a woman was spotted trying to kiss her spouse during a Zoom conversation in a now-viral video. In the short clip, the man was spotted speaking about the GDP while wearing headphones, when his wife entered the room. She went down to kiss his cheek, presumably unconscious that he was being viewed by others on the conference call.

The man quickly averted the kiss by pointing to his computer screen and stating that he was on call. In fact, he was heard asking his wife, "What nonsense are you doing?" since he was annoyed by the interruption.

Harsh Goenka, a businessman, published the video on Twitter, which attracted a lot of attention. While posting it, he remarked, "Zoom call.....so hilarious."

The video has received over half a million views and hundreds of comments since it was shared on the microblogging site.