HS Doreswamy, a 103-year-old freedom fighter and activist, passed away after a cardiac arrest

On 12th May, he recovered from COVID-19, however, he was again admitted to the Jayadeva Hospital in the city, where he passed away after a heart attack. 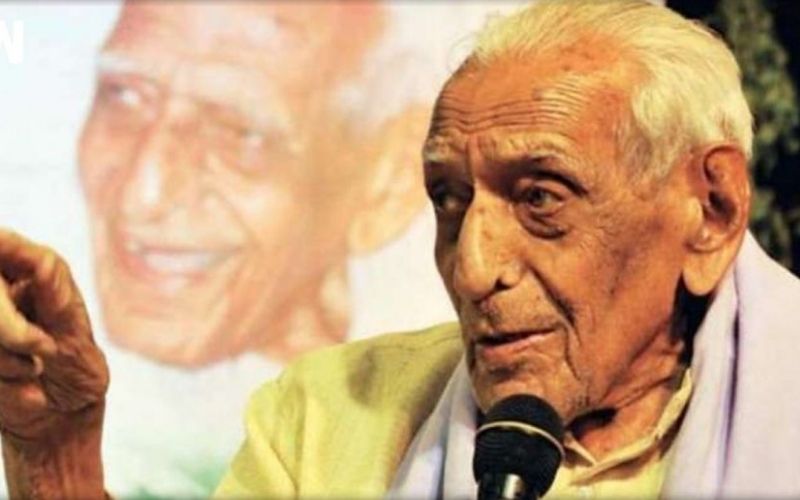 HS Doreswamy, a 103-year-old freedom fighter and activist, took his last breath Wednesday (26th May) in Bengaluru. Reportedly, on 12th May, he recovered from COVID-19, however, he was again admitted to the Jayadeva Hospital in the city, where he passed away after a heart attack. “He experienced heart failure and a cardiac arrest and passed away today (Wednesday) around 1.30 pm,” CN Manjunath, a cardiologist at Jayadeva Hospital, reported to the media.

According to the doctor, he has had valvular heart disease for the past ten years and has been hospitalised at Jayadeva Hospital several times throughout that time. And, earlier this month, he tested positive for coronavirus.

Harohalli Srinivasaiah Doreswamy was born on 10th April 1918, in the village of Harohalli, in the ancient Kingdom of Mysuru, and was raised by his grandfather after his parents passed away when he was five years old. At an early age, he became involved in the freedom fight, doing everything from putting small-time bombs in mailboxes and in British government officials' record rooms to burning papers, organising rallies, and general strikes in the state of Mysuru against British rule, and actively participating in the Quit India campaign. From 1943 to 1944, he was imprisoned for 14 months. The Gandhian also took part in the Mysore Chalo movement, which aimed to force the Maharaja of Mysore to join the Indian state after independence.

With a Bachelor of Science from Central College in Bengaluru, Doreswamy worked as a high school teacher before venturing into journalism with the publication of the ‘Pauravani' newspaper.

In the 1950s, after independence, Doreswamy joined the Bhoodan movement and began fighting for the unity of Karnataka. He was an active member of the Jayaprakash Narayan anti-Emergency movement. He worked for the rights of farmers and other marginalised people in the 1980s. He was also a member of the anti-corruption movement in India.

Moreover, Doreswamy's spirit was unaffected by his age, and he continued to work till his death. Furthermore, until the COVID-19 epidemic broke out, he was involved in different protests.

At the age of 102, HS Doreswamy took part in a five-day demonstration in Bengaluru against the Citizenship Amendment Act in February 2020. (CAA). During the British Raj and subsequently, Doreswamy operated the publishing firm Sahitya Mandira and the Indian daily ‘Pauravani.'

Doreswamy has been a continuous figure in Karnataka's civil rights fights for decades. He was a member of various agitations and committees fighting pollution of waterways and trash dumping near impoverished areas in and around Bengaluru. He spearheaded an anti-encroachment rally in Bengaluru in October 2014, requesting that the state government enforce the Land Grabbing Prohibition Act, 2007. In the Kodagu area, he was also active in agitations against the displacement of Adivasis from their tribal lands.

In addition, he was also a significant player in the anti-Citizenship Amendment Act and anti-NRC demonstrations. He had vowed to stage a monthly demonstration against CAA and NRC before the epidemic began.

After Doreswamy joined a protest gathering dubbed "Save the Constitution" in February 2020, great controversy erupted. The independence warrior was accused of acting like a Pakistani agent by an infuriated BJP MLA. "There are a lot of fake freedom activists out there. One may be found in Bengaluru. Now it's time to define Doreswamy. What happened to the old man? He acts suspiciously like a Pakistani agent" Basanagouda Patil Yatnal, a BJP MLA from Vijayapura, stated. Despite the fact that the subject reached the Karnataka Assembly and became a major problem, Yatnal refused to apologise.

Following the detention and arrest of Bengaluru-based climate activist Disha Ravi in February 2021, Doreswamy sent a note of solidarity to the young activist, encouraging her to "stay strong."