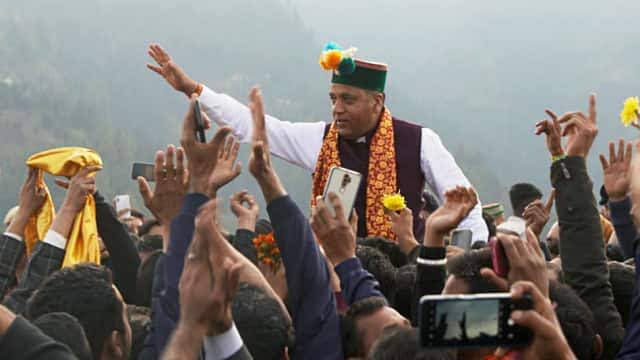 The Congress has completely defeated the Bharatiya Janata Party in Himachal Pradesh. Even though the formal announcement of the complete seats is yet to be done, but it has been decided that the next government in the state is going to be formed by the Congress. Meanwhile, it has been said on behalf of Himachal Pradesh Chief Minister Jairam Thakur that I am going to submit my resignation to the Governor in a short while from now.

Along with this, the discussion is also in full swing that after the humiliating defeat in Delhi Municipal Corporation and the defeat of BJP's central president JP Nadda in his home state Himachal Pradesh the very next day, a period of political whispering has started. are done. While the Aam Aadmi Party has faced defeat in the Delhi Municipal Corporation elections, the Congress has been defeated in Himachal Pradesh. The same Congress, which has been considered politically non-existent in the whole country.

BJP President JP Nadda took command of BJP's election campaign in Himachal Pradesh. Himachal is also Nadda's home state, so everyone's eyes were on the BJP's performance in this state. JP Nadda's term as BJP president ends early next year. In such a situation, if the BJP's performance in his home state is not good, then it may be difficult for him to get another term as BJP President.