Himachal New CM: The name of this leader of Himachal tops in the race for the post of CM

Harsh Vardhan Chauhan was born on 14 September 1964 in Nahan to Guman Singh Chauhan, a former cabinet minister in the Government of Himachal Pradesh. He did his schooling from St. Edward's School, Shimla. He has done BA and LLB from Himachal Pradesh University. 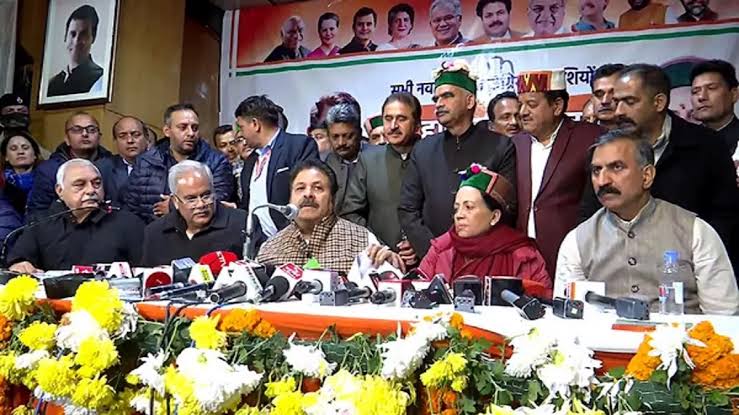 After Himachal's return to power, the tussle continues in the Congress to choose the CM. According to the information, the Congress high command is going to take the final decision regarding the CM. Meanwhile, state in-charge Rajeev Shukla, supervisor and Chhattisgarh Chief Minister Bhupesh Baghel and former Haryana Chief Minister Bhupinder Singh Hooda have sent a list of 5 names to the high command.

The name of Harshvardhan Chauhan, who reached the Vidhan Sabha after winning for the sixth time from Shillai, is now seen coming on top in the CM race. According to information received from sources, National General Secretary Priyanka Gandhi has asked for Chauhan's profile. Harsh Vardhan Chauhan's name is at the third place among the 5 names that have been sent. Harshvardhan Chauhan's father Late Thakur Guman Singh has been a seven-time MLA who has been a cabinet minister twice in Dr. YS Parmar's government.

Shillai assembly constituency MLA and Congress candidate Harshvardhan Chauhan first started student politics in college from NSUI. District Sirmour NSUI was the District General Secretary. He was the General Secretary of Himachal NSUI in the Campus Body of Shimla University. After that took entry in Youth Congress and became State General Secretary of Youth Congress. Became MLA for the first time in 1993 in Shillai Vidhansabha. After that 1998, 2003, 2007, 2017 and 2022 were elected. Meanwhile, he was also the President of Congress Committee from District Sirmaur for 2 times.

Harshvardhan Chauhan has also been the chairman of the CPS once in the state government and the state employment generation board once. He is General Secretary, Senior Vice President, State Spokesperson of Himachal Pradesh Congress Committee and currently State Media Incharge and Deputy Leader of Opposition. Harsh Vardhan Chauhan was born on 14 September 1964 in Nahan to Guman Singh Chauhan, a former cabinet minister in the Government of Himachal Pradesh. He did his schooling from St. Edward's School, Shimla. He has done BA and LLB from Himachal Pradesh University.