Hate business in Delhi under the guise of 'Rehdi Jihad'!

Many protesters took to the dharna with sticks and screamed slogans like "Jai Shri Ram, Jo Hindu-Hind ki baat karega Wahi Hind Pe Raaz Karega" as seen in the video. It is evident from this that this is no longer just a fight, but a Hindu-Muslim conflict. 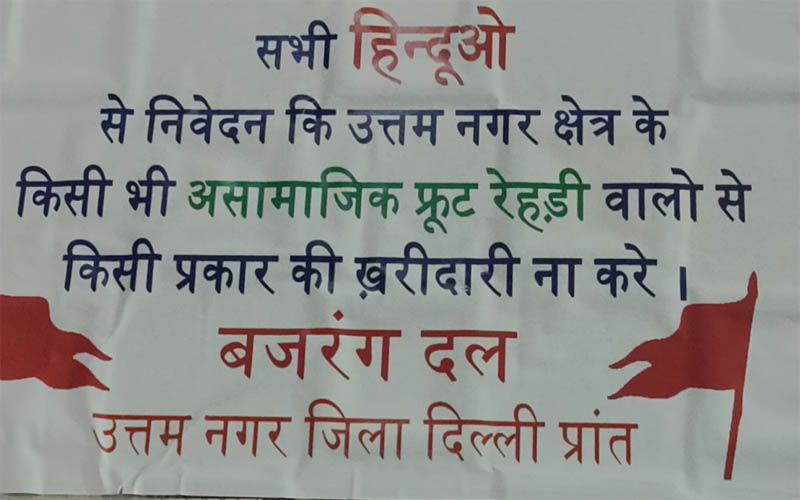 Today, the world is grappling with inflation, unemployment, and poverty, and the Coronavirus has sparked a nationwide outcry. People do not have enough food to eat, so they eke out a living by setting up street vendors. In such a setting, some people, ignoring the poor's issues, refuse to allow street sellers to set up shop. By using the label "Rehdi Jihad," they are taking jobs from the poor and instilling enmity throughout the country.

This isn't the first time in the country that a social issue has been politicized. On June 18, a similar incident occurred in Delhi's Uttam Nagar neighborhood. A furious battle broke out late Friday evening between local dealers, shopkeepers, and street vendors. The businesses claim that they were attacked and looted by street vendors. While local street vendors claim that a street vendor was seriously injured in the altercation and was immediately admitted to the neighboring Deen Dayal Upadhyay Hospital.

As reported by various media, doctors referred him to AIIMS Hospital after seeing his health deteriorate late at night. It is being reported that the dispute began just because of the street vendors in front of the shop, which progressed to the point where both sides battled bitterly. The beatings occurred, and neighborhood residents claim that the police have yet to take any action. On June 19, Hindutva activists took to the street with sticks and sticks to protest, stating that street vendors should no longer be used in this region. Following that, at roughly 5 p.m., Hanuman Chalisa was also recited in the centre of the road.

“If there was a dispute between a street vendor and a store, what was the fault of all the street vendors?” questioned Ajay Singh, a leader of fruit vendors in West Delhi. “The poor are being exploited by giving this a communal flavor, and the administration is doing nothing about it. It all started with a minor altercation between a fruit vendor and a store. However, numerous anti-social forces became involved, turning the situation into a communal issue. Rizwan, one of our merchants, was afterward attacked by a mob armed with sticks. He has been admitted to Deen Dayal Upadhyay Hospital with significant injuries. Even though the police have filed an FIR, efforts are being made to save the offenders. Rizwan was beaten up by a group of 10-15 persons, however, the FIR only names 3-4 people. When the police were questioned about why no one was arrested, they stated that if they recognize someone, an arrest is conceivable. However, there are numerous CCTV cameras in the area, and this information can be gleaned from them. It is apparent that all of this is taking place beneath the administration's nose, with their knowledge, because we had previously filed extortion charges with the DCP, but the police had taken no action until now."