Condemning the brutal attack, when the literary legend JK Rowling wrote on Twitter, “Feeling very sick right now, let him be okay”, a man by the name of Meer Asif Aziz replied, “Don’t worry you are next.” 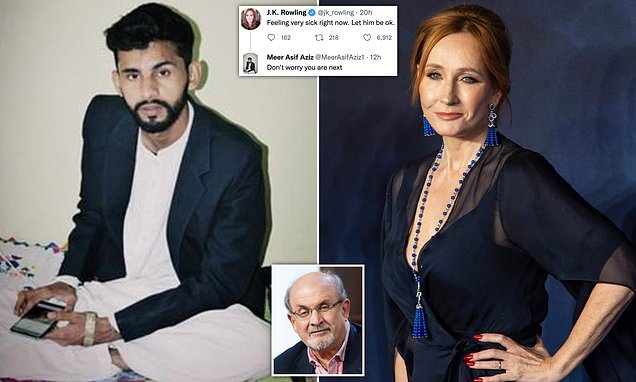 It is the penchant of a pen that survives daggers. Their dagger may have the attributes of distorting an artist into pieces, but it will never shatter the piece of art left behind. The memory of the author Salman Rushdie being attacked in the public domain hasn’t faded the front page, and Islamist Extremists have already taken it upon themselves to threaten to kill anyone who extends support to him, and they leave no one behind. Not even a legendary author like JK Rowling, a household name for her series of Harry Potter Books.

Condemning the brutal attack, when the literary legend JK Rowling wrote on Twitter, “Feeling very sick right now, let him be okay”, a man by the name of Meer Asif Aziz replied, “Don’t worry you are next.” Reportedly the same man who threatened Rowling of her life extended support for the accused to try to kill Rushdie. Meer Asif Aziz wrote, “ The name of this man is Hadi Matar. He is a revolutionary Shia fighter following the fatwa of late Ayatollah Rohullah Khomenei.” Khomenei is the same cleric who on February 14, 1989, called for Rushdie to be killed for writing “The Satanic Verses,” which as per him insulted Islam.

Rushdie, who faced Islamist Death Threats and Fatwas ever since he wrote “The Satanic Verses” in 1988, was attacked by a 24-year-old Hadi Matar, a Muslim Man of Lebanese Origin who stayed in New Jersey. Unafraid of the consequences, the man stabbed Rushdie while he was being introduced at a literary event at the Chautauqua Institution of Western New York.

Till the time of writing of this article, the account of Meer Asif Aziz (@MeerAsifAziz1) was not blocked. It was up and running which he prominently used to give death threats.