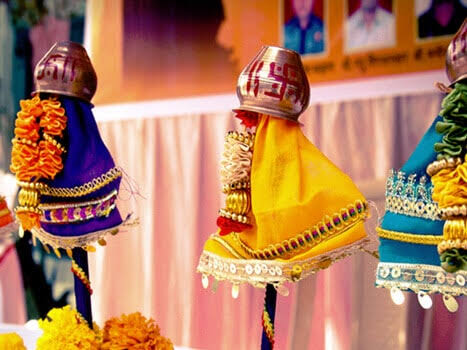 Celebrated in the first month of Chaitra, Gudi Padwa is primarily celebrated by the people in Maharashtra and Goa. The festival derives its name from two words — ‘gudi’ which is the flag of Lord Brahma and ‘padwa’ which signifies the first day of the phase of the moon.

The festival signals the onset of the warmer days and the spring season. It is known by various names in different parts of the country, such as Ugadi in Kannada or Naba Barsha in West Bengal.

On Gudi Padwa, gudi flags are made with red or orange cloth, which are decorated with flowers and on top of this flag, a copper or silver vessel is placed upside down. This signifies prosperity and victory.

The Gudi Padwa celebrate It is celebrated in and near Maharashtra and Goa on the first day of the Chaitra month to mark the beginning of the New year according to the lunisolar Hindu calendar. The word padava or padavo comes from the Sanskrit word pratipada which refers to the first day of a lunar fortnight. Gudhi Padwa is a spring festival that marks the new year for Marathi and Konkani Hindus. The festival is observed withwith colourful floor decorations called rangoli, a special Gudhi flag (garlanded with flowers, mango and neem leaves, topped with upturned silver or copper vessel), street process of dancing and festival of foods.