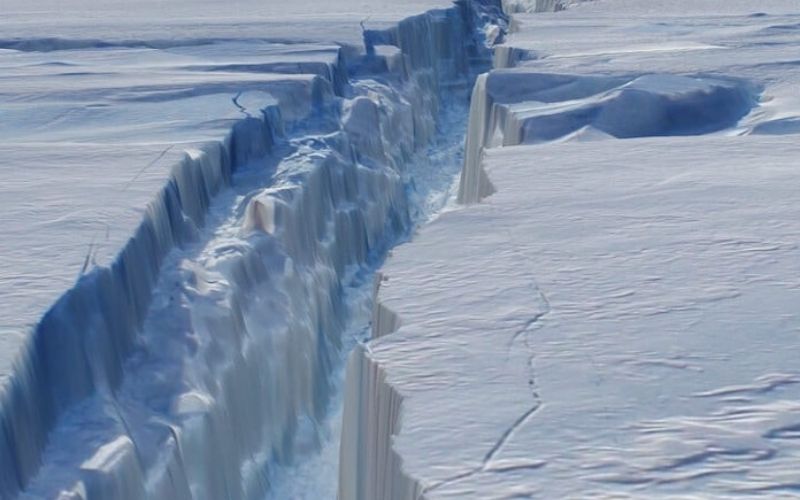 The issue is with its ice shelf, which is a frozen ledge at the border of the Pine Island Glacier. The ice shelf aids in the stabilisation and containment of the massive flow of ice behind it.

But it's now falling to bits.

More than a quarter of the ice shelf has broken away in the last five years, forming massive icebergs that crash into the ocean and float away.

Simultaneously, the glacier has begun to lose ice at a quicker rate. The pace of ice pouring from the glacier into the sea has increased by 13% since 2017.

According to main research author Ian Joughin, a glaciologist at the University of Washington, the major question is what happens next. There is a potential that the ice shelf will stabilise and the flow of ice will slow down, or at least cease speeding up.

However, “the alternative option is that this process will continue and the shelf will break apart considerably more swiftly than we expected,” he said.

Pine Island Glacier is a behemoth of the Antarctic ice sheet. According to studies, the glacier, which is located on the western border of West Antarctica and next to the Amundsen Sea, is dumping almost 60 billion tonnes of ice into the ocean each year. Since at least the 1970s, the rate of these losses has been increasing.

According to Joughin, the ice shelf at the glacier's edge—a type of floating ice ledge sticking out into the sea—is akin to a cork in a bottle. It aids in the stopping of the flow of all the ice pressing against it from behind. The more the cork deteriorates, the more ice melts into the ocean, contributing to rising global sea levels.

Pine Island Glacier was already causing concern among scientists. Warm ocean waters seeping through the ice have dissolved the ice shelf from the bottom up in recent years, causing it to shrink.

Warm seas melting the ice from below has become a major concern for glaciers along West Antarctica's coast (Climatewire, April 10, 2018). The water looks to be originating from warm currents rising up from the deep waters near the Antarctic coast. Experts believe that shifting wind patterns in the Southern Hemisphere, which are likely influenced by climate change, are assisting in driving these warm currents up to the ice's border.

According to the researchers, when Pine Island's ice shelf shrank and deteriorated, the flow of ice began to accelerate in "fits and starts." It would speed up for a few years, then slow down for a few years. The ice flow was generally constant between 2009 and 2017.

That began to change approximately five years ago, when the ice shelf began to drop icebergs more often, some of which were several kilometres long. The glacier lost a piece twice the size of Washington, D.C. last year.

The experts believe that the glacier's irregular speed of movement over the previous few decades is at least partially to blame. Cracks and rifts began to form in the ice over time. Beginning in 2017, the shelf began to deteriorate fast.

For the time being, experts are unsure if the shelf will continue to crumble at the rate it has in recent years. Joughin described the process as "very challenging to replicate in models."

Fortunately, satellites are assisting scientists in keeping a close eye on the glacier. Every six days, the European Space Agency creates fresh pictures of the location.

However, if the shelf continues to deteriorate, the flow of ice may increase substantially, possibly doubling or tripling, according to Joughin. It's a frightening prospect; Pine Island Glacier has already contributed more than a fifth of Antarctica's contribution to sea-level rise in recent decades.