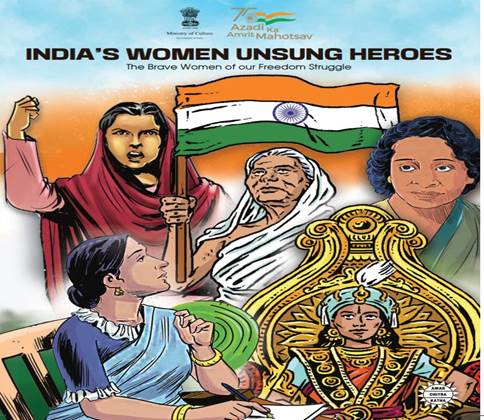 The current government has taken several unique steps to give social recognition to those people who deserve it but has been denied for so long.

In a similar unique initiative, Union Minister of State for Culture Meenakashi Lekhi released a pictorial book on India’s Women Unsung Heroes of Freedom Struggle as part of Azadi ka Mahotsav, in New Delhi on January 27.

Publisher Amar Chitra Katha and the Culture Ministry has collaborated for this unique initiative. Meenakashi Lekhi said, “The book celebrates the lives of some of the women who led the charge and lit the flame of protest and rebellion throughout the country. It contains the stories of queens who battled colonial powers in the struggle against imperial rule and women who dedicated and even laid down their lives for the cause of the motherland.”

She added, “If we go through the glorious past of Indian history, we find that the Indian culture was the one which celebrated women and there was no place for gender discrimination. This is amply evident from the fact that women had the courage and physical strength to fight like soldiers in the battlefield

She also narrated the tales of valor of some of the unsung women heroes included in the book and said, “Women were equally vocal in expressing dissent against imperial powers. For example, Rani Abbakka repulsed the Portuguese attacks for several decades. However, history has hardly been written with this perspective and now as part of Azadi ka Amrit Mahotsav, as is the Prime Minister’s vision, the sacrifices of these unsung heroes will be brought to light.”