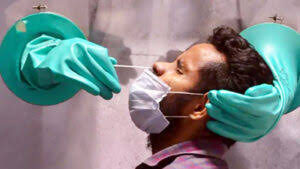 Keeping in view the Corona infection in the country, random sampling of international passengers has been started at the airports of the country from today itself. The cases of corona infection in China seem to be increasing rapidly. Three cases of Omicron's sub-variant BF.7, responsible for the new wave of infection in the neighboring country, have also been found in India. After which the country's government is on alert, Union Health Minister Mansukh Bhai Mandaviya also held a Covid review meeting on Wednesday. The Central Government is on alert mode regarding the situation of Covid.

After a high-level review meeting on Corona infection on Wednesday, Health Minister Mansukh Bhai Mandaviya said that the corona infection has not ended yet. He wrote in a tweet that, 'Today the situation was reviewed with experts and officials in view of the increasing cases of corona in some countries. He further said that Corona is not over yet. I have directed all concerned to be vigilant and strengthen vigilance. We are ready to face any situation.

Three cases of Omicron's sub-variant BF.7, responsible for the new wave of infection in China, have also been found in the country. Due to the new variant of Kovid-19, the cases of infection in the neighboring country are increasing rapidly. If experts are to be believed, there may be three waves of corona in China. Right now the first wave is going on in China, whose peak may come by mid-January. The Gujarat Biotechnology Research Center confirmed the first case of BF.7 in India last October. Two cases of the new variant of corona infection have been reported from Gujarat and one case has been reported from Odisha.