Got bail, not released: Navneet Rana returned to jail after spending a few hours in hospital, Rana couple will come out tomorrow

Amaravati Independent MP Navneet Rana and her MLA husband Ravi Rana, imprisoned behind bars in Byculla jail on charges of sedition since April 23, have been granted bail 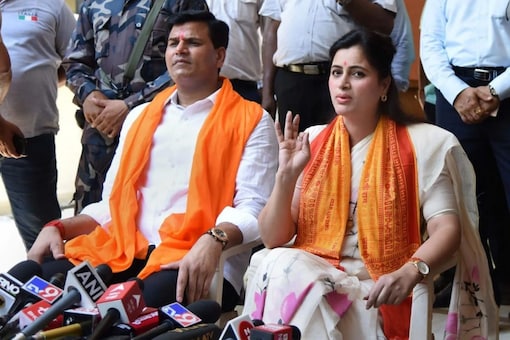 Amaravati Independent MP Navneet Rana and her MLA husband Ravi Rana, imprisoned behind bars in Byculla jail on charges of sedition since April 23, have been granted bail by the Mumbai sessions court. Despite this, the Rana couple will have to spend the night in jail. Both of them could not be released due to legal complications and the non-receipt of a detailed judgment copy from the court.

However, due to ill health, Navneet Rana went to JJ Hospital in Mumbai for a few hours. Here he has a CT scan and the doctor has given him some medicines to relieve the pain. Navneet was complaining of back pain for the past several days. Earlier on April 30, the court had reserved its judgment in this case till May 2.

The court has given conditional bail and said that the Rana couple will not do any more such disputes in the coming time. Apart from this, they will not tamper with the evidence and will not hold any press conference on this whole matter. Both have been given this bail on a personal bond of Rs 50,000. Meanwhile, Navneet Rana has reached Mumbai's JJ Hospital for treatment from Byculla Jail. Navneet had complained of back pain only late at night.

At the same time, Brihanmumbai Municipal Corporation (BMC) has reached outside the flat of the Rana couple in Khar. Earlier, the BMC had pasted a notice outside the house, in which it was asked to inspect the flat on Wednesday and investigate the illegal construction. If any illegal construction is found in the flat, then the work of removing it will be done by the breaking squad of BMC.