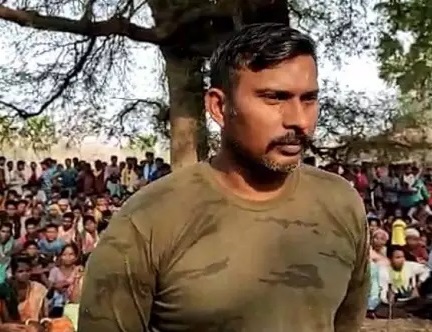 Rakeshwar Singh Manhas, a Central Reserve Police Force (CRPF) officer, walked free on Thursday evening after being held captive by Maoists for five days in the forests of South Bastar in Chhattisgarh.

“It was a complete release. Official sources reported that the abducted CRPF CoBRA battalion commando was handed over to social worker Dharamlal Saini and tribal community leader Telam Boraiya, who served as emissaries for his release.

Manhas is currently residing at the police station in Basaguda.

"As soon as we learned about the Maoists' demand that the government form a team of interlocutors, we immediately formed a group of local social workers and a few journalists and asked them to go inside the forest and get the commando released," Bijapur SP Kamlochan Kashyap said.

The commando from CoBRA's 210th battalion is from Jammu and was part of an anti-Naxalite operation that left from Tarrem camp in Bijapur on April 2 and 3.

"I have official confirmation of his safe return. His well being is in good shape. Today is the most joyous day of my life. I was still hoping for his return, "Meenu, the wife of CRPF commando Rakeshwar Singh Manhas, spoke out.

The operation resulted in a ferocious gunfight with Maoists, killing 22 security forces and injuring 31 others in the deadly ambush on April 3 along the Bijapur-Sukma district border.

Later, Maoists issued a press statement claiming that they had kidnapped the missing CoBRA commando and demanding that the government include names of interlocutors for the commando's release.