We’re calling her “The Whimsical Angel”. At any moment, the Soft Sprite could be transformed into a Stone-Cold Icy-Nymph, with a sword to kill, only Gigi does not need a sword, if she decides to slaughter. 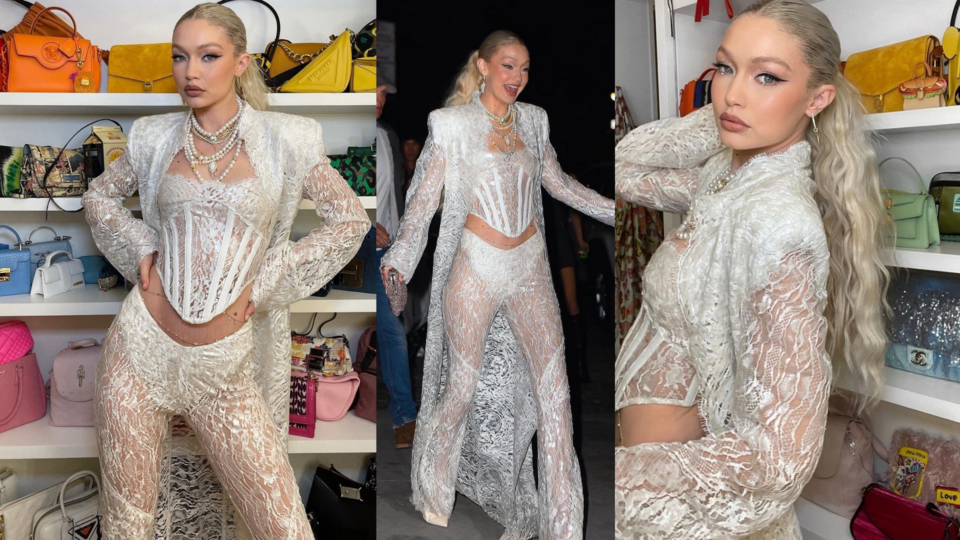 When one of the most Iconic Supermodels celebrates her 27th birthday, the world gets inquisitive, especially, when the date falls a few days ahead of the Met Gala. If you are someone like us who’s obsessed with the Edgy-Supermodel Sisters, you’d have refreshed Instagram a million times to see what Gigi, whose Instagram bio says, “Khai’s mom” chose to wear, and boy oh boy, were we in for a Fashion Treat.

You thought Co-Ord sets were getting mundane, Hell No!

For her 27th birthday, which was a star-studded affair, Hadid gave her own narrative to the “Corset Trend” that has been dominating the Runways and FashionPavements for a while now. In an all Dion Lee ensemble, Gigi amalgamated a White Corset top with a Lace induced, floor-length duster. The sheer trousers concealed as much as they revealed. To take an angelic undertone, Hadid was laden with mostly white, with a tint of yellow for vibrance, Jacquie Aiche pearls. White Pumps expanded the monochrome, head to toe.

For eyes, she chose a winged liner, with tiny rhinestones studded (It’s Maddy’s hegemony, we infer), but she didn’t overdo it. We’re calling the look “A Whimsical Angel”. Though minuscule, it appears that at any moment, the Soft Sprite could be transformed into a Stone-Cold Icy-Nymph, with a sword to kill, only Gigi does not need a sword, if she decides to slaughter.

The Birthday party was organized at Held at the private member’s club Zero Bond in New York City. Her ultra-stylish guest list included Supermodel Emily Ratajkowski, Actress Blake Lively, Antoni Porowski, and Martha Hunt. This is not an initial moment when Gigi took the shade of Ivory to the fore. A mere scroll of her Instagram Feed reveals her camaraderie with the shade.