Giant Tree Falls in a Chandigarh school, One School Girl Dead, Many Injured

In the Union Territory of Chandigarh, there has been a tragic accident where in a 250-year-old Giant Tree fell in a school, after which a child reportedly died. 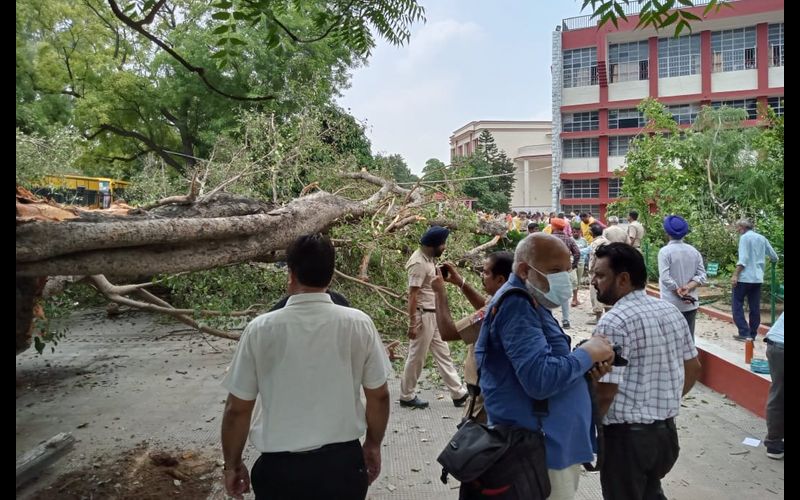 In the Union Territory of Chandigarh, there has been a tragic accident where in a 250-year-old Giant Tree fell in a school, after which a child reportedly died. As per the sources, a huge tree fell down in a school located in Sector-9 in the morning, following which a girl died, and many were injured.

The children were playing near the tree during lunchtime when the tree fell on the children. The injured children have been admitted to GMSH Hospital. At the same time, as soon as the news of the accident was received, the parents of the children panicked and reached the school. After this accident, there is news of parents creating a ruckus at the gate.

It is being told that at that time children from classes 6th to 12th were playing under the tree. Then suddenly the giant tree fell. Many children were trapped under the grip of this tree, during which the school principal informed the police. As soon as the information was received, the police reached the spot quickly. Simultaneously, the rescue team buried the children under the tree and rescued the trapped children. Several children have been admitted to nearby private and government hospitals, where they are undergoing treatment.

It is said that it was a 250-year-old Peepal tree, which suddenly fell. According to media reports, so far the condition of 3 children is said to be critical. All three are being treated at GMSH-16. After the end of summer vacations, schools started again on July 1.