A ten-year-old boy named Kush Tyagi, who was apparently, playing in the park of Sanjay Nagar Sector-23, Ghaziabad was attacked and badly injured by a dog of the Pitbull breed. 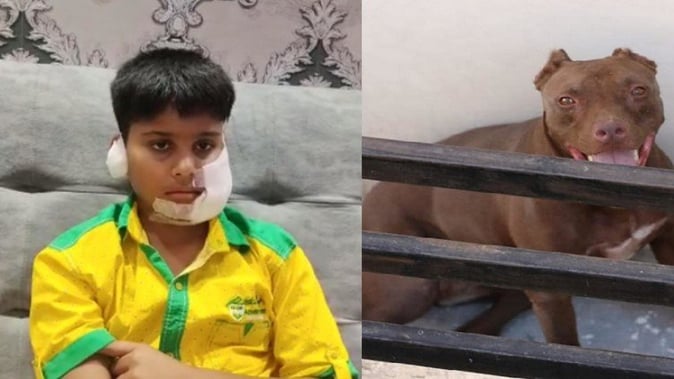 A ten-year-old boy named Kush Tyagi, who was apparently, playing in the park of Sanjay Nagar Sector-23, Ghaziabad was attacked and badly injured by a dog of the Pitbull breed. Following this, Kush had to undergo surgery which lasted for about two and a half hours, in which he got 150 stitches. He was hospitalized for three days.

Ghaziabad News: On Thursday, the Municipal Corporation imposed a fine of five thousand on Lalit Tyagi, the owner of the dog, after the video of the dog attack went viral. Kush's father Sachin Tyagi told that on September 3, Lalit's daughter was walking the dog. He ran away from her and attacked Kush. People hardly separated Kush from the dog. This is the third case of a dog attack in Ghaziabad in seven days. Earlier, a dog attacked a child in a lift in Rajnagar Extension. Then the dog in the street with the book.

Kush Tyagi was attacked by a dangerous pitbull breed dog in the park which came out of the hand of the girl, who was the daughter of the dog's owner. It kept biting the child for ten seconds. Kush bled in the attack and even his flesh came out from his face. There were five deep wounds on his cheek, ear, and hand. The surgery lasted two and a half hours and 150 stitches were used to fill them.

The child who reached home after being in the hospital for three days is shocking. The video went viral on social media on Thursday after CCTV footage of the September 3 incident was found. It is 23 seconds. It is seen that the daughter of Lalit Tyagi of the colony is walking the dog. At a distance, Kush is playing with friends. Suddenly the dog releases from the girl's hand and swoops down on Kush running with lightning speed. When he falls down, the dog keeps biting him for ten seconds.