The most violent conflict between Israel and Hamas since a 2014 war in the Hamas-controlled enclave has sparked international fears that the situation could spiral out of control. 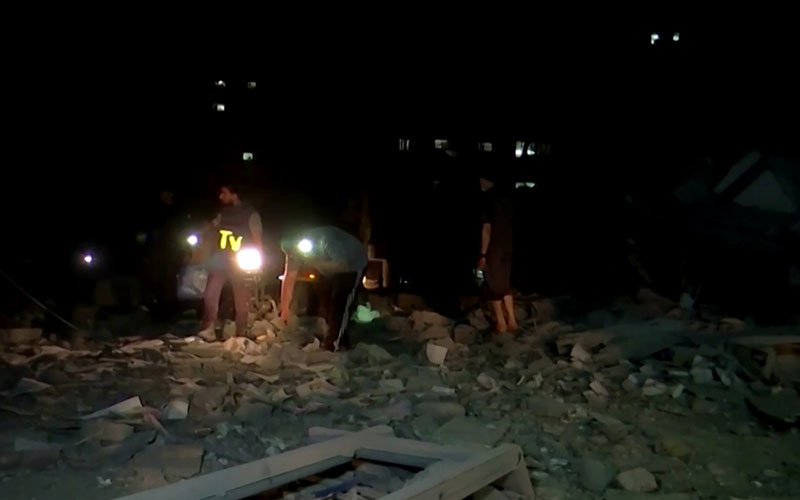 In the region's most intense hostilities in years, Israel carried out hundreds of airstrikes in Gaza on Wednesday, while Palestinian militants fired numerous rocket barrages at Tel Aviv and the southern city of Beersheba.

According to Gaza's health ministry, at least 43 people have been killed since the violence erupted on Monday. Medical authorities in Israel have confirmed that six people have died.

A multi-story residential building in Gaza collapsed after Israel warned its residents to evacuate ahead of time, and another was severely damaged after being struck by airstrikes.

Early on Wednesday, Israel said its warplanes had struck and killed many intelligence leaders of the Islamist organisation Hamas. Other attacks targeted rocket launch sites, Hamas headquarters, and the homes of Hamas officials, according to the military.

The most intense offensive between Israel and Hamas since a 2014 war in the Hamas-run enclave has raised international concerns that the situation could escalate out of control.

Many Israelis awoke to the sound of sirens at 3 a.m. in Tel Aviv, signalling the start of several waves of missile attacks in Israel's heartland.

In response to the attacks on Gaza City's tower buildings, Hamas' armed wing said it fired 210 rockets at Beersheba and Tel Aviv overnight. According to Israel's military, about a third of the rockets missed their target and landed in Gaza.

The bombing of Tel Aviv, Israel's commercial capital, posed a new obstacle for Israel in its fight against Hamas, which Israel and the US view as a terrorist organisation.

During the Muslim fasting month of Ramadan, there had been weeks of unrest in Jerusalem, with clashes between Israeli police and Palestinian demonstrators in and around Al-Aqsa Mosque.

These flared up ahead of a court hearing, which has been postponed, that could result in Palestinian families being evicted from homes claimed by Jewish settlers in East Jerusalem.

Furthermore, violence has also erupted in the occupied West Bank. A 16-year-old Palestinian was killed in clashes with Israeli forces on Wednesday, according to medical sources.