Adani Group's company 'Adani Power' has set up a 1600 MW thermal power plant in Godda, Jharkhand through this, electricity will be supplied to Bangladesh Power Development Board (BPDB). This supply will be done through a transmission line. 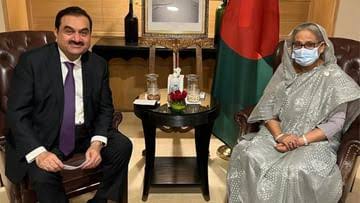 Bangladesh Prime Minister Sheikh Hasina met Indian business tycoon Gautam Adani on Monday. During this meeting, Adani Group Chairman Gautam Adani praised Sheikh Hasina's courageous behavior. He also assured that the transmission line work under Godda Power Project would be completed by December this year. Adani Group's company 'Adani Power' has set up a 1600 MW thermal power plant in Godda, Jharkhand through this, electricity will be supplied to Bangladesh Power Development Board (BPDB). This supply will be done through a transmission line.

Bangladesh is an important partner of the country under India's 'Neighborhood First Policy' i.e. 'Neighborhood First Policy'. The scope of cooperation between the two countries spans many areas including security, trade, power and energy, transport and connectivity, science and technology, defense sector, rivers and maritime affairs. After meeting Hasina, Adani shared a picture with her in a tweet and wrote, 'It is an honor to meet Bangladesh PM Sheikh Hasina in Delhi. His vision for Bangladesh is inspirational and bold. We are committed to commissioning our 1600 MW Godda Power Project and dedicated transmission line to Bangladesh by the country's victory day on 16 December 2022.

Bangladesh PM Hasina had gone to Nizamuddin Auliya Dargah in Delhi on the first day of her visit to India i.e. on Monday. Sheikh Hasina is on a four-day visit to India. On Monday, External Affairs Minister S. Had met Jaishankar and discussed many issues. On Monday, Prime Minister Hasina was received by Minister of State for Textiles and Railways Darshan Jardosh on her arrival in Delhi. Sheikh Hasina's visit to India is being seen as an important visit. It is believed that this visit of PM will further strengthen the multi-faceted ties between India and Bangladesh.