Footprint, a unique film festival for children to explore filmmaking

The purpose of the fest is to provide children a platform so that their voices can be heard and we in turn can hear them. 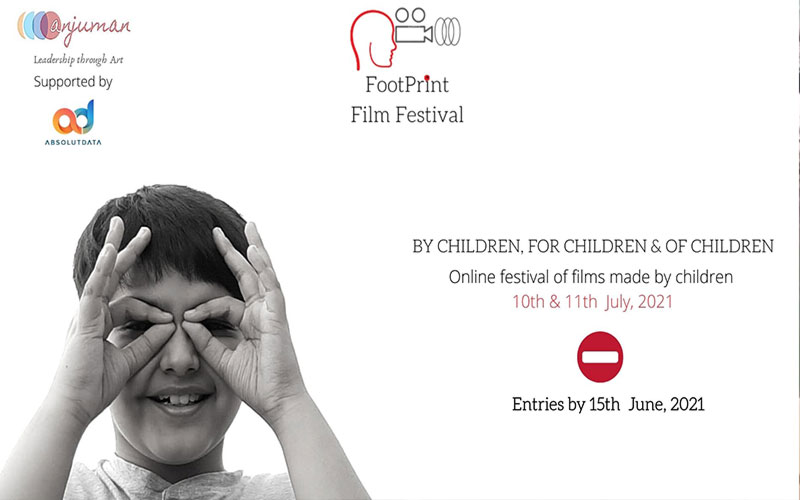 Footprint, a film festival ‘for the children by the children’ has been carefully curated by two remarkable ladies, Bidisha Roy Das and Priyanjana Dutta. Footprint kick started during the pandemic, it is an open space which nurtures the voice and creativity of young ones to be expressed on the celluloid through short films. The team of Footprint is a close unit which promotes education of the 21st century skills and to make use of filmmaking as a tool of learning for children. We sat down with the two ladies to know more about the unique film festival -

1. How did you come up with such an idea for a film fest in India? Where did you get inspired?

Bidisha- When you have been in films, you do not need any other external inspiration. Both Priyanjana and I have been working with students for some time in this specific area. Teaching children how to make films, engage with films so it came quite naturally creating a space or platform where what children create could be shared so we thought let’s have a festival where childrens’ work could be shared by them. Priyanjana- Last year, before the pandemic we were taking these online workshops. We thought there should be a platform where the films of these children could be aired for other kids and parents to see. What better way to give them a platform than an online film festival, I do believe it is one of a kind.

2. Could you elaborate on the purpose of the fest?

Priyanjana- We have always believed children have a lot to give, a lot to share, and filmmaking is just one of the ways in which they share what they feel. Most of the time what children have to say is very important; it’s just that as we grow up, we stop listening to what youngsters have to say. If you watch some of the films that were presented in the festival last year, you will realize that children are a lot more mature than adults. What they say in their films screened at the fest will make you sit up and notice. So, the purpose of the fest is to provide children a platform so that their voices can be heard and we in turn can hear them.

3. This is the second installment of Footprint, share with us something great you came across in your first festival which blew you away and made you feel fulfilled that you setup this whole thing.

Priyanjana- Quite a few things, firstly the experience itself. Till last year film fests were all offline and that is a completely different experience. So, the experience of organizing the fest online itself ‘blew us away’ in that sense. It was a learning experience for us.

Secondly the films made by the children, I do not want to seem like someone who is talking down to kids just because of their age but frankly I did not expect this wide a range and the films were made so brilliantly given the constraints of the pandemic. Some of the kids were from the workshops Bidisha and I had conducted, and I am very proud to say they made some wonderful films. Films also came to us from places like Bangladesh and across the country, all between ages of 10 to 17.

Bidisha- In between the screening schedules we had these ‘films addas’ where kids whose films were being screened had a chance to interact with each other. I thought that was very special, it was wonderful to see a 10-year-old and a 16- or 17-year-old interact over their films. Also, to get to listen to their perspective and their thoughts on what is going around, which is very important. If we can keep that space alive for the children, that is what would be fulfilling.

4. You have curated workshops such ‘Newsworthy’, ‘Soundly’ and ‘Lets make films’, do share the thought behind them.

Bidisha - We have been working in education for some time, so these workshops are products which got developed over a time. Anjuman’s purpose is to use the pedagogue of art to develop 21st century skills, so these workshops are an outcome of that purpose. How to create learning experiences for students using different art forms, films and photography are the more applied art forms. Young artists are looking at how through the medium of art, certain skills can get developed, because everybody is not wanting to be an artist, but those skills which are built by applying their creativity can be used anywhere. I believe art opens your mind; it opens the way of looking at things, to be able to collaborate, which is such a great competency to have.

5. Organizing and holding a festival is not easy, it involves collection of funds which is so important, and could you elaborate on how you manage that for Footprint?

Bidisha- Last year when we did the festival, we did not have any funds, not saying we have a lot this year. Priyanjana and I have been doing the workshops previously and we decided on doing the festival. It happened because of people. That is my experience of organizing film festivals, especially film festivals of this nature which are small and niche. They happen because of the intent of people. Wonderful group of people just came together, they believed in what we wanted to do, and they contributed their time immensely, including all the jury members.

This year, we are very lucky that we have been supported by both individuals and a few organizations. Further, the funds from these paid workshops also go into organizing the fest. There is a lot more focus on funds, not because we want to make profits, it is not a business venture for us at all. It is so we can sustain the festival, as we would like to make it an annual event. The fest involves a huge investment of every individual’s time which is making it possible to conduct it.

6. Footprint is right now its nascent stage, what are your plans to expand it and make it more popular in the country?

Bidisha- The plan is for more people to know about the festival and that is how we would like it to grow. Last year we screened 30 films, this year we would like to screen about 50 films or even more. We are growing the festival in small ways. The growth is in the quality of the kind of films which come in, in the engagement, in the kind of workshops that we can offer to children. Last time we got films even from outside India. The online platform opens for anybody which makes it great. The plan is to share and spread the word about it, because it is online, it’s open and free, it’s non-competitive, and we would want more children to know about it. Teachers of filmmaking in schools and other institutions, we would want them to look at filmmaking as a way to explore and learn. That is how we would want to grow, to reach out to more schools, see if we can provide the learning for children.