Flash floods in Dharamshala after heavy rains in Kangra district, warning issued for locals and tourists. 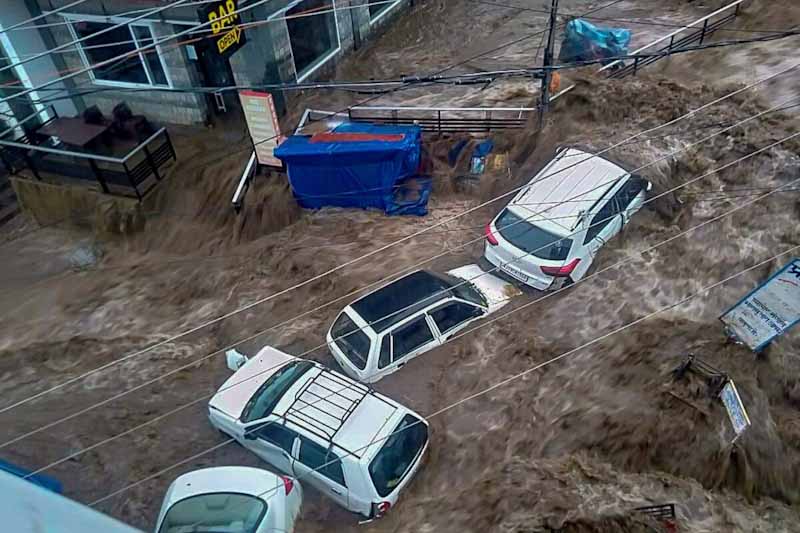 Torrential rainstorms wreaked havoc in Himachal Pradesh, leading to floods and landslides. Houses are badly devastated and vehicles also got swept away in flash flood, people are in shock. Boh valley of Kangra district is most affected, rescue operations are on, authorities and locals are trying together to bring the situation under control. Seven villagers were rescued and nine people are still missing said the rescuers. Meanwhile, three people were killed at a village in Uttarakhand after their house collapsed in a land slide.

Vimukt Ranjan Senior Superintendent of police told the media that the rescue operations are underway currenly. “We can’t say it’s a cloudburst in Dharamshala but initially it was a flash flood caused by heavy rainfall,” said Nipun Jindal, Deputy Commissioner of Kangra district. Due to heavy rains Manjhi River overflows drastically which led to destruct several houses and shops in Dharamshala.

Dabrani region of Uttarkashi district is also affected by landslide due to which the Gangotri National Highway is blocked. Wreckage and Debris covered the road. According to the district administration officials, the Border Road Organisation (BRO) was seen trying to clear the highway.

Since the beginning of the 2021 monsoon season, Himachal Pradesh has remained drier than usual, with under 150mm rainfall until the second weekend of July- nearly 20% shortfall. However, since Sunday morning, the situation has turned drastically over the region, with Dharamshala receiving more 300mm rainfall within 30 hours.

IMD has said that there are favourable conditions for the advance of southwest monsoon over Delhi, some parts of Punjab, Rajasthan, Uttar Pradesh and Haryana. Conditions are becoming favourable for monsoon over the remaining part of the country during the next 48 hours said the weather agency. The monsoon has also claimed the lives of twenty eight people in separate incidents of lightening in Rajasthan and Uttar Pradesh, news agency PTI reported.