Amidst tensions, internet services have been suspended in Rajasthan’s Bhilwara 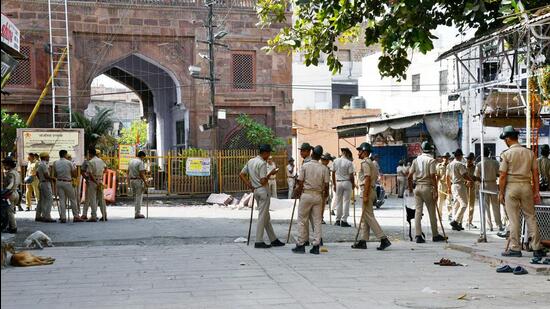 Tension has increased once again after the murder of a youth in Bhilwara city of Rajasthan late on Tuesday night. Bhilwara city will be closed on behalf of Hindu organizations today, ie on Wednesday. Here, the administration has once again shut down the internet in the city. At the same time, in view of the situation, a heavy police force has been deployed. During the bandh, Hindu organizations have gathered at a crossroads, police forces are deployed everywhere.

The tension started on Tuesday night when 20-year-old Adarsh ​​Tapadia was going on a scooty in Shastri Nagar in Sanganer town. During this, two youths on a bike stopped him and stabbed him in the chest. this caused his death. After getting the information, a crowd gathered at the Mahatma Gandhi Hospital in the city. The family refused to accept the body and the atmosphere got heated. In this case, the police have taken three people into custody, one of them is a minor.

According to the information, the miscreants also attacked Adarsh ​​with a bar and broke his legs. Thereafter the miscreants fled from the spot. It is also coming to the fore that the deceased was called by some youths. After this dispute between the two groups, the entire area has been converted into a cantonment. In the area of ​​Sanganer where this incident took place, tension flared up after two youths were assaulted 5 days ago. After this, the protest increased so much that Hindu organizations announced a Bhilwara bandh on Wednesday demanding the arrest of the accused.

It is being told that on Tuesday, Honey, the younger brother of the deceased Adarsh, had a dispute with some minor boys. After this, elder brother Adarsh ​​also interrupted him. The police have also called a minor for questioning. After this incident, a Japta has been deployed in the area. At the same time, the body has been kept in the mortuary. The relatives have demanded to raise the dead body only after the arrest of the accused.