The railway blockade became the third major demonstration by farmers, following the Republic Day tractor rally and the ‘chakka jam’ on February 6, tas a mark of disagreeing with the government on the new farm laws 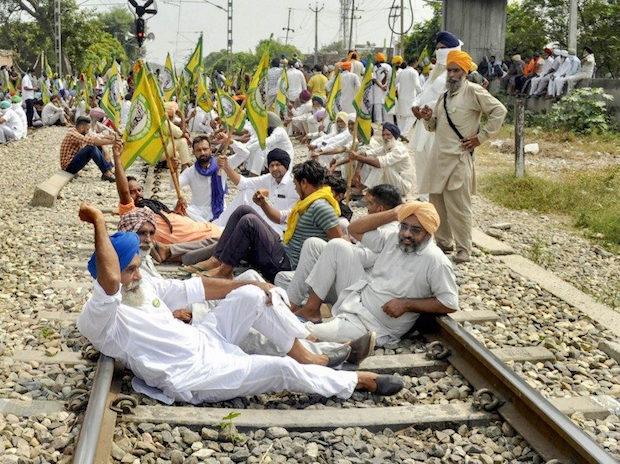 In a nationwide-strike against the farm laws framed by the ruling Government, the farmers in the country employed ‘Rail Roko’ (Stop the train) protest for four hours today, starting from 12 p.m. till 4 pm, with a view to pressurizing the government for a repeal. The peaceful agitation led largely by the old and senior farmers followed by the young, was quite a scene at most of the railways tracks in India including Patna, West Bengal and nearly 50 stations in Punjab and Chandigarh apart from Delhi/NCR.

While the refreshments are distributed to the stranded passengers waiting at the stations, the protest announced by the Samyukta Kisan Morcha (SKM), the umbrella body of farmer unions spearheading the agitations, last week marked another feather in the cap of agitating farmers who wouldn’t give up on the farm laws which they claim are disadvanteous to them and are meant to eat up the lions’ share of their produce at a petty price. Notably, the railway blockade will be third major demonstration by farmers, following the Republic Day tractor rally and the ‘chakka jam’ on February 6.

The Farmers gathered at railway stations across the country and blocked train tracks in an attempt to pressurise the government to repeal the new agriculture laws. The Railways had deployed 20 additional companies of RPSF troops across the country ahead of the protest, as the sources claim.

The Director General, Railway Protection Force, Arun Kumar ensured extra security measures in states like Punjab, Haryana, Uttar Pradesh and West Bengal. “We want to persuade them to not cause inconvenience for passengers. We have a four-hour window and we want it to get over peacefully,” Kumar had said in the run up to the arrival of the farmers in large numbers.

Furthermore, the agitation found support politically too as the Samajwadi Party legislators staged a protest outside the Uttar Pradesh assembly today in support of the farmers' agitation before the beginning of the state's budget session. He raised slogans against the government supporting the farmers. The party lawmakers sat before the statue of former prime minister and kisan leader Chaudhary Charan Singh in the Assembly and demanded that the Centre's three new agri-laws be repealed.

While the Rail Roko protest seems to be putting quite a pressure on the government, this is to be remembered that Chaudhary Birender Singh, a former Union Minister and father of Bijender Singh, a BJP MP from Hisar, Haryana, had not only supported the famers by joining the protests earlier but also gave a statement in the media saying, “‘Hand over farm laws to farmers, ask them to come up with their version.’

He had said yesterday, “I have a suggestion that the government should hand over all three laws to the farmers. And tell them that we have framed these laws, return the same after framing your own and then will sit for talks. It will resolve the issue. It’s very easy if somebody (in the government) accepts my suggestion.”

Notably, Singh, is the grandson of peasant leader Sir Chotu Ram, who was known for his initiatives and involvements in support of the farming community in India during the British Regime.

Furthermore, Bharatiya Kisan Union (BKU) leader Rakesh Tikait has also declared that the ongoing farmer protests will be extended to poll-bound West Bengal in the future.