Sharad Pawar, the leader of the Nationalist Congress Party (NCP), met Prime Minister Narendra Modi at his residence today. According to accounts, the meeting lasted 50 minutes. As per NCP insiders, the two leaders discussed a variety of matters, including the newly constituted Ministry of Cooperation and agricultural difficulties. 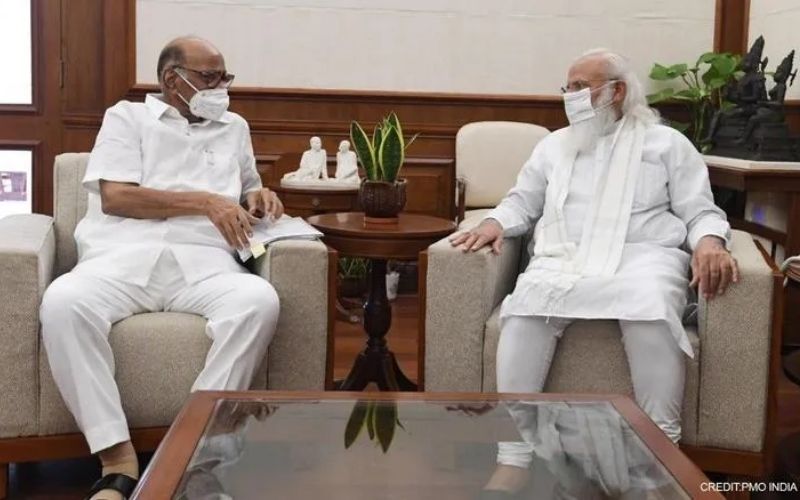 "Rajya Sabha MP Shri Sharad Pawar met with the Prime Minister," the PMO stated in a tweet on Saturday. Furthermore, Pawar's meeting with PM Modi lasted approximately 50 minutes, according to the sources.

The meeting between the NCP head and PM Modi comes in the wake of controversial remarks made by Maharashtra Congress chief Nana Patole. Nana Patole, the state's chief minister, identified Pawar as the "remote control" of the Shiv Sena-led Maha Vikas Aghadi (MVA) government.

In addition to this, Patole also caused a stir as he suggested the MVA administration was keeping tabs on his movements and that the Shiv Sena and the NCP felt the ground was slipping from beneath their feet as a result of his party's growing influence.

The NCP is a prominent constituent of Maharashtra's Maha Vikas Aghadi (MVA) administration, which is led by Uddhav Thackeray's Shiv Sena. Congress is the MVA's third ally.

The monsoon session of Parliament will begin on 19th of July and last till 13th of August. Moreover, the recently designated Leader of the House in Rajya Sabha, Piyush Goyal, met with key opposition figures on Friday, including former Prime Minister and Congress leader Manmohan Singh, his party colleague Anand Sharma, and NCP leader Sharad Pawar, ahead of the monsoon session.

The contacts with prominent opposition figures are being viewed as a government outreach exercise ahead of the session. The administration has proposed 17 new bills for the session, including three to replace recently issued ordinances.