Today, on the call of United Farmers Front, there is a Kisan Mahapanchayat at Jantar Mantar in Delhi. In which people are reaching Delhi in large numbers to participate. 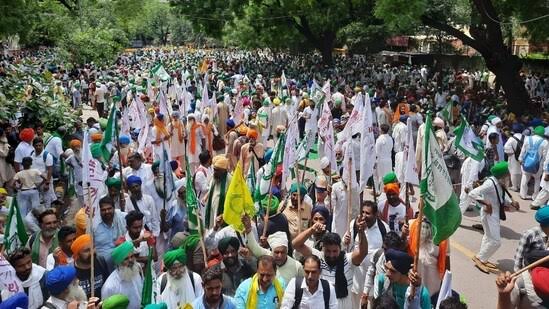 Today, on the call of United Farmers Front, there is a Kisan Mahapanchayat at Jantar Mantar in Delhi. In which people are reaching Delhi in large numbers to participate. Due to which there is a traffic jam of several kilometers long on the Delhi Meerut Expressway from Ghaziabad to Delhi near Sarai Kale Khan. Even the ambulance is stuck. United Kisan Morcha Apolitical has announced Kisan Mahapanchayat on 22nd August at Jantar Mantar in Delhi.

According to the information, this will be a one-day program, which will be organized with complete peace and discipline. Security has been beefed up at Singhu border ahead of the call for farmers' protest at Jantar Mantar today. Along with this, a close watch is being kept on the vehicles coming to the capital. This Panchayat will be organized at Jantar Mantar from 11 am to 4 pm.

After the conclusion of this Panchayat, a memorandum will be submitted to His Excellency the President. Giving information, the United Kisan Morcha said that if the government tries to create any kind of disturbance, then the government itself will be responsible for that. In fact, many demands are being made by the Kisan Panchayat. In which one of the major demands is that the farmers families of the Lakhimpur Kheri massacre should get justice, while the release of the farmers in jail and the arrest of Union Minister Ajay Mishra Teni, the main culprit of the massacre.

According to the Traffic Police, the Kisan Mahapanchayat will start from Jantar Mantar at 10:00 AM. m. on Monday, and between 4 and 5,000 people are expected to attend. Janpath, Windsor Place, Connaught Place, Ashok Road, Baba Kharak Singh Marg, Pandit Pant Marg are likely to remain congested throughout the day. In addition, the local police can also barricade many places. Therefore, the traffic police advised people to leave home in the morning and use the subway instead of private vehicles to avoid traffic jams.