Vijay, dressed in a light blue shirt and a black face mask, pedalled through the streets of Chennai, surrounded by heavy security and gleeful onlookers. The video quickly went viral. 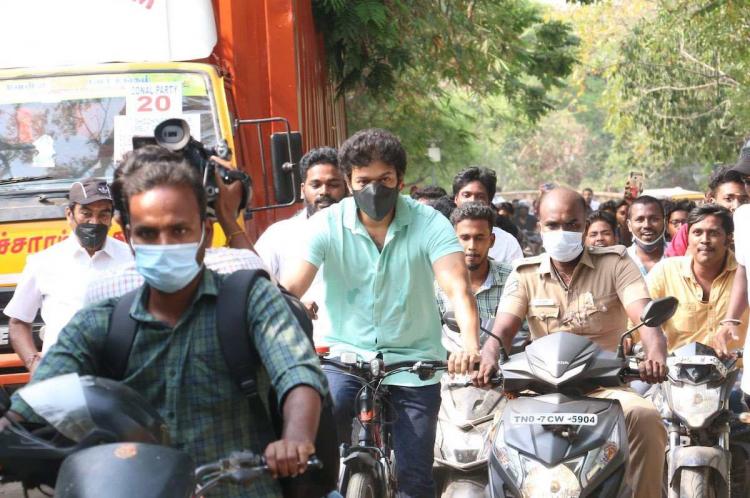 To the delight of his fans, actor Vijay was seen riding a bicycle to a polling booth at Neelankarai in Chennai as the Tamil Nadu assembly elections began on Tuesday.

Vijay, dressed in a light blue shirt and a black face mask, pedalled through the streets of Chennai, surrounded by heavy security and gleeful onlookers. The video quickly went viral.

Vijay has been outspoken on political and social issues, using his film and music launch events to make his points.

After the release of his movie Mersal, which shows scenes that irked the far-right, Vijay has faced a severe attack from Tamil Nadu’s BJP. During the filming of his most recent film, Master, he was also subjected to Income Tax raids.

Vijay directs a growing legion of youngsters in Tamil Nadu. Actor Vijay, like his contemporaries Kamal Haasan and Rajinikanth, has fed the fandom with politically charged statements and films that have stoked popular discontent.

His films on demonetisation and GST have been hugely successful in Tamil Nadu in recent years.

The DMK has been attempting to capitalise on Vijay's symbolic show by emphasising the plight of ordinary people as a result of the fuel price increase. The party is hoping to return to power after a decade by capitalising on the state's strong anti-BJP sentiment.

Tamil Nadu goes to the polls on Tuesday amid allegations of voter bribery from both the AIADMK and the DMK, as well as the seizure of more than Rs 230 crore in cash and a protest demonstration in one village demanding cash.

Satyabrata Sahoo, chief electoral officer, said his office had not received any communication from the Election Commission of India (ECI) about rescinding polls in any assembly segment following complaints about parties distributing cash to voters.