The show goes viral among the art lovers and draws immense response. Its a series of ink paintings during the lockdown, mounted at Art Alive Gallery in New Delhi. 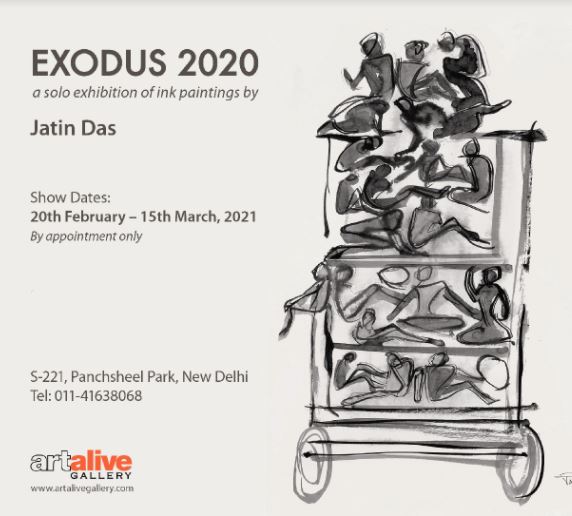 The show goes viral among the art lovers and draws immense response. A series of ink paintings mounted at Art Alive Gallery in New Delhi, by the artist during the lockdown in the wake of a mass migration of labourers across Indian cities, is the first such series done by an artist of his stature.

Actor and social activist Nandita Das, his daughter had invited one and all to visit the show in a video from the gallery. Because of the content, Exodus 2020, drew immense response.

This is what the veteran artist has to say about these warm but disturbing sketches.

“My inspiration for my work has always come from the working class. Those who make roads, lay bricks, paint high rise buildings. The beldars, thhelawallahs, kudawallahs, manhole cleaners, rag pickers, house-help, construction workers, all those who toil non-stop. During the lockdown the migrant workers, who build our homes and cities, had to go back to their villages. There was no work in the city, so no earnings. Hundreds and thousands of them had to walk bare feet, some on cycles, and others atop buses, without fearing the scorching sun, without food and water. They went with their little belongings, tucked under their arms, or on their heads. Men and women carried their children on their shoulders, in baskets, in their tired arms, quietly walking, through days and nights, non-stop. What appeared in the newspapers and television, and what I had observed over the years, all spontaneously came pouring out. And that is how the series was born, which I have named ‘Exodus 2020’. Normally, I paint figures, who are bare bodied, beyond any specific context of time and place. I don’t have any other elements of clothing, architecture, foliage or animals, or anything that would localise it. But this is a special series, a response to our troubled times.”

A must visit, the show is first such documented history, that the artist has lived himself, in a modern art gallery. It would on physically on till this coming Wednesday.

Sunaina Aanad, the owner Art Alive, one of the finest galleries of Delhi, says, “We were talking generally about the migrant labourers. We were really disturbed on it. I just happened to ask Jatin Das, if he was doing anything on it. He showed me few sketches, and said, ‘I am doing more’. I was so moved by the series, that I had no choice but to mount it. Usually I move the show in the gallery, but this time, the show moved me.

This is Art Alive’s first show with the veteran, and an important document in the history of modern India. Online, it would be available forever, on the following link of the gallery