During the meeting with community members on July 9th, the jeweller claimed that he was “advised” not to hold the function. 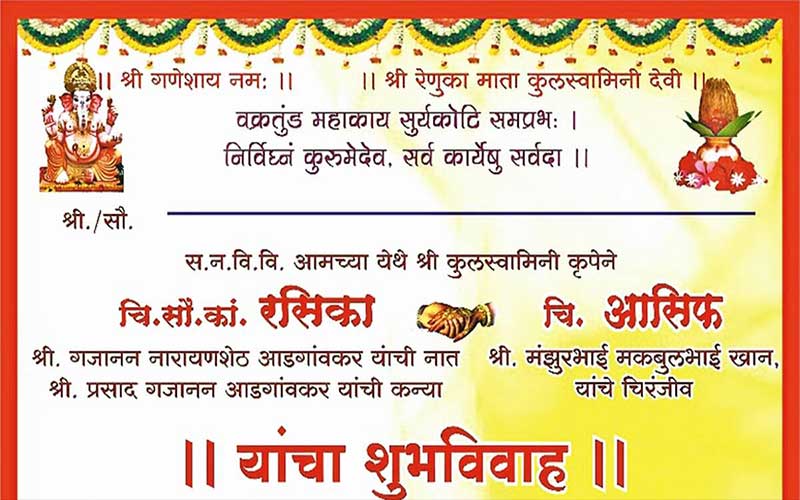 Nashik: At a time when fake news on WhatsApp can cause murders, it was only natural that a family had to cancel their daughter's wedding ceremony owing to threats from local community who dubbed the event as a case of "Love Jihad".

They wanted to celebrate their daughter's happiness, but could not realize this dream. All it took was a leaked wedding card.

Prasad Adgaonkar, the bride’s father and a prominent jeweller told that her Rasika suffered from physical disability and the family had faced some difficulty in finding a match for her. When she and Asif Khan, a former classmate, announced their desire to get married, the families accepted their match as they knew each other from a long time.

The happy union was registered at a Nashik court in the presence of both the families in May. As told by the family, there were no conditions of a conversion whatsoever.

At the time, they also agreed to conduct a ceremony as per Hindu rituals on July 18 before the woman left for her in-laws’ house. The function was to be held in the presence of close relatives at a Nashik hotel. Thereafter a copy of the invitation card got circulated in WhatsApp groups resulting in protests, messages and calls, including from “strangers” to cancel the function.

During the meeting with community members on July 9th, the jeweller claimed that he was “advised” not to hold the function. “A lot of pressure started coming from people of the community and others, and so it was decided to cancel the marriage function,” another family member said.

Subsequently, the family submitted a letter to a local community organization that the ceremony had been called off. Sunil Mahalkar, president of Lad Suvarnakar Sanstha later confirmed: “We have received a letter from the family and they have informed us that the marriage has been cancelled.”

Despite threat and intimidation, the families stand resolute that they will not the society separate the young couple. As cases of misguided activism multiply in the country, it is perhaps time to think when did our society become so stringent? And how?