As Trump was being investigated by special prosecutor Robert Mueller in 2017 and 2018, White House counsel Don McGahn battled a subpoena from the House Judiciary Committee to testify in the committee's investigation of Mueller's findings. 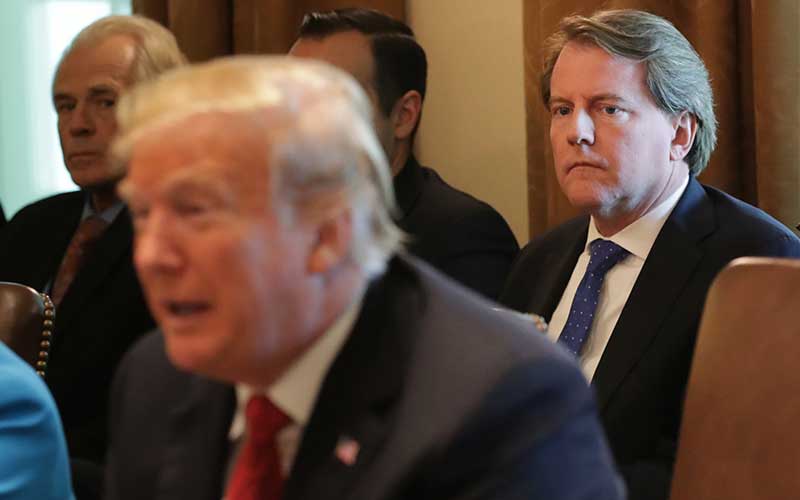 Donald Trump's former White House counsel has agreed to testify on charges that the ex-president illegally obstructed the inquiry into his campaign's links to Russia after stalling for two years, according to a court filing.

As Trump was being investigated by special prosecutor Robert Mueller in 2017 and 2018, White House counsel Don McGahn battled a subpoena from the House Judiciary Committee to testify in the committee's investigation of Mueller's findings.

According to the Mueller report, Trump asked McGahn to dismiss Mueller as the Justice Department's special counsel in 2017, which McGahn declined.

As the news reached the media, Trump reportedly told McGahn to deny the incident ever occurred.

McGahn's testimony on other charges of Trump obstruction was also referenced in Mueller's final report, which was released in March 2019.

Despite Mueller compiling a list of around a dozen cases of Trump trying to obstruct the Russia probe, attorney general Bill Barr announced in early 2019 that there were no grounds to prosecute Trump.

The House Judiciary Committee then opened an impeachment investigation into Trump, led by Democrat Jerry Nadler. However, key witnesses, most notably McGahn, declined or were denied permission to testify by the White House.

A court filing said the committee and McGahn had reached an agreement for him to testify behind closed doors on Wednesday, almost four months after Trump left office.

The interview will concentrate on information from the Mueller report that pertains to McGahn, and McGahn will be asked if the information is correct.

The interview's transcript will be made public.

Even if McGahn agrees with Mueller's accusations of obstruction, it's unclear how the committee can proceed against Trump, who has been impeached twice for conduct unrelated to the Mueller investigation.

Trump was not a party to the committee's agreement with McGahn, according to the court, leaving open the possibility that he might still object, citing executive privilege.

"When the former President pledged to combat 'all of the subpoenas' directed at his office, he launched a dangerous campaign of unprecedented obstruction," Nadler said.

"Today, we begin to put an end to the age of obstruction," he said. McGahn had not said that he would testify.