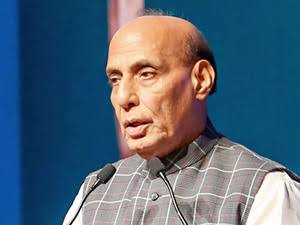 Defense Minister Rajnath Singh participated in the 'Shaurya Diwas' program organized by the Indian Army in Budgam. During this, Lieutenant Governor Manoj Sinha was present with him. Infantry Day is celebrated every year on 27 October. Infantry Day is being organized in honor of the unprecedented bravery of the country's infantry. The contribution of the country's foot soldiers is remembered for saving Jammu and Kashmir from the grip of Pakistan.

In his address, the Defense Minister said, "Today, the huge building of India that we see, rests on the foundation of the sacrifice of our brave warriors. This huge banyan tree named Bharat is irrigated by the blood and sweat of those brave soldiers. Today's Shaurya Diwas is a day to remember the sacrifices and sacrifices of those brave fighters. Today is a day to pay tribute to his sacrifice and dedication.