En route from Delhi to Kanpur: President Kovind Visits his Native Village In UP

It'll be President Kovind's first visit to his birthplace since taking office. Despite his intention to visit the location sooner, he was unable to do so because of the coronavirus outbreak. 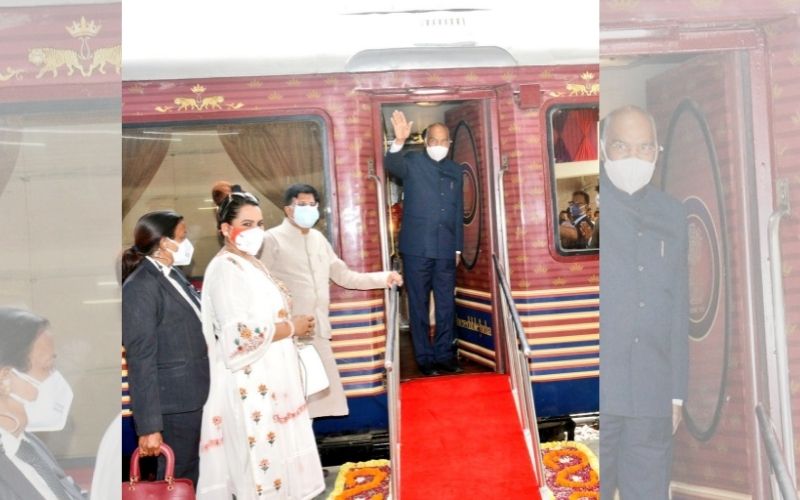 President Ram Nath Kovind took a train journey to visit his hometown in Uttar Pradesh on Friday, where he will meet with old friends from school and the early days of his social work. This will be the first time in 15 years that a sitting president will commute by train.

Informing about the event, the Rashtrapati Bhavan tweeted: "President Kovind travels to Kanpur on a special presidential train from Safdarjung railway station. The train would make two stops in Kanpur Dehat, at Jhinjhak and Rura, before arriving at Kanpur Central in the evening."

Furthermore, Railway Minister Piyush Goyal can be seen in pictures of the president boarding the train published by the Rashtrapati Bhavan on the social media platform.

It'll be President Kovind's first visit to his birthplace since taking office.

Despite his intention to visit the location sooner, he was unable to do so because of the coronavirus outbreak.

Moreover, Jhinjhak and Rura are close to the president's birthplace, Paraunkh hamlet in Kanpur Dehat.

The last time a president journeyed by train was when A P J Abdul Kalam boarded a special train in 2006 from Delhi to Dehradun to attend the Indian Military Academy (IMA) cadets' passing-out parade.

Moreover, according to records, the country's first president, Rajendra Prasad, frequently travelled by rail, according to the Rashtrapati Bhavan. Soon after entering office, he travelled to his birthplace of Ziradei in Bihar's Siwan district. According to the statement, President Rajendra Prasad boarded the president's special train from Chhapra to Ziradei, where he spent three days. He took the train across the country. His successors enjoyed train rides to engage with the people as well.

President Kovind will board a train at Kanpur Central Railway Station on 28th June bound for Lucknow, the capital city of Uttar Pradesh.

The service of the Presidential Saloon, operated since independence, had been halted on the President's instructions, as per the railways.

A statement issued by Northern Railways stated that "This saved the exchequer crores of rupees per year that would have been spent on the construction and upkeep of the saloon. Post-Covid, as the country entered a period of rebirth and reconstruction, the Indian Railways urged that the President go by people's transport."

It has been reported that special train service was provided for his excellency's trip from Delhi to his native hamlet.

As per a statement published on Friday, "This step will be a huge morale lift for railway workers who have worked tirelessly during the pandemic. Also, this would assist to stimulate and strengthen people's confidence in using trains to go to other areas of the country for business, tourism, and other purposes."

Railway Minister Goyal, who was present at the station to send off Kovind, praised him for using the railroads for his travel and stated that the extensive rail network will help the country restore its economic grandeur very quickly after the epidemic.

Reportedly, President Kovid will return to New Delhi on a special aircraft on 29th June.