Emotional Messi In Tears As He Bid Farewell to FC Barcelona

Messi told a news conference, This is the toughest moment of my career. When the club told me, I just froze. This is all like a bucket of cold water has been poured over me and we are still coming to terms with it. 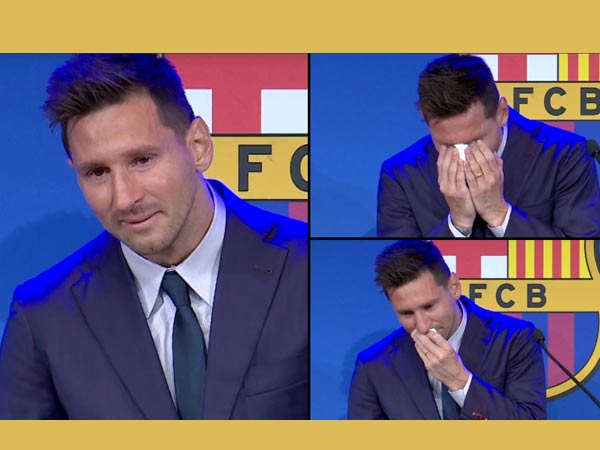 New Delhi: Lionel Messi, The Super Star of World Football got emotional and wept as he bid farewell to his FC Barcelona on Sunday. Messi broke down as he walked onto the stage before conducting his news conference and was handed a tissue by his wife Antonella Roccuzzo as he fought back the tears. He said,  “This is the toughest moment of my career. When the club told me, I just froze. This is all like a bucket of cold water has been poured over me and we are still coming to terms with it,” he sobbed. Messi was greeted by a lengthy standing ovation from the media, current and former teammates and coaches in attendance.It was noticeable that he was not accompanied by Laporta or any of the other Barcelona directors during the act.All 35 trophies he won during his time at the club were laid out for what the club described would be a private photo session after the news conference.

Last week Barca announced that it could no longer afford him after a glittering two decades. The 34-year-old Argentine's emotional news conference is organized because of that announcement. Messi has been at Barcelona for 21 years and became its all-time top goalscorer with 682. Last year he asked to leave the club but changed his mind. This time he came to an agreement to stay but financial stumbling blocks at Barca meant La Liga would not allow the deal. He is out of contract and will leave for free. Messi,  a six times Ballon d’Or winner,  said, “These recent days, I’ve been giving lots of thought about what I could say, and the truth is that I can’t think of anything,” Messi told a news conference as hundreds of fans, many wearing his number 10 jersey, massed outside Barca’s Camp Nou stadium to bid farewell to the player.

“This is really difficult for me after so many years, being here my entire life, I’m not ready for this and honestly last year with all the nonsense, I was convinced I knew what I wanted to say but this year is not the same,” he said. “I’ve been here so many years, my entire life since I was 13. After 21 years, I’m leaving with my wife, my three little Catalan-Argentine kids, and I can’t tell you we won’t come back because this is my home, and I promised my children that,” he added.

Messi confirmed he is talking with French club Paris St Germain  (PSG)over a possible move. .However, PSG declined to comment on the report that Messi would be arriving in Paris later on Sunday. "We are not in a position to confirm anything," a club spokesman said. While Messi did not confirm he would definitely join the Parisians, he said his plans were to carry on playing as long as possible, adding he still harbours ambitions to win another Champions League trophy. “As long as I go on being competitive and as long as my body responds (I'll carry on playing),” he told a news conference. “I tried to behave with humility and respect and I hope that is what remains of me when I leave the club,” said an emotional Messi as hundreds of fans, many wearing his No. 10 jersey, massed outside Barca's Camp Nou stadium to bid farewell to the player they called Messiah.

It had been widely reported by local media that Messi was set to stay at Camp Nou, with the player admitting he had agreed to a five-year deal involving a 50% pay-cut. Barca, whose debts total way over 1 billion euros ($1.18 billion), were unable to make the deal work within the frameworks of La Liga's financial fair play regulations - prompting their surprise U-turn announcement last Thursday. "Honestly, when the elections happened (in March), I spoke with (Barca president Joan) Laporta, we had dinner and after that I was convinced I would be staying," Messi said. "My contract was never the issue ... What I know is that I did everything I could. The club says it could not happen because of La Liga. I can guarantee you that I did everything I could to stay. Last year I didn't want to and I said that, but this year it was different."