Tens of millions of mask-wearing Vietnamese were set to vote on Sunday to elect a largely rubber-stamp legislature in the midst of a rapidly spreading COVID-19 outbreak in the country. 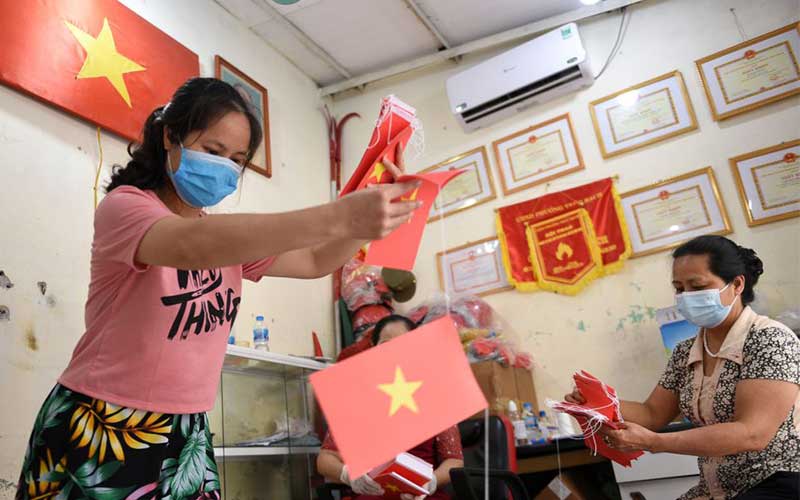 Amid a rapidly spreading COVID-19 outbreak in Vietnam, tens of millions of mask-wearing Vietnamese were scheduled to vote on Sunday to elect a largely rubber-stamp legislature.

In the election for the 500-seat National Assembly, fewer independent candidates are running than in previous elections, which are held every five years and usually after the ruling Communist Party holds its congress to elect new leadership.

Nearly 69.2 million eligible voters will choose from 866 candidates for the legislature. They will also elect members of the regional and district people's councils.

Ahead of the election, National Assembly Chairman Vuong Dinh Hue said, "I hope that all voters, aware of their position as owners of the country, will vote to select the most trustworthy and deserving candidates to represent their voices."

Nearly 92% of the candidates for the National Assembly are party members, while the remaining 8% are independents.

The number of independent candidates this year dropped to 74 from 97 in the previous elections in 2016, according to local media, although the number of assembly deputies who were not party members has been cut in half over the last three elections.

According to official results, 99% of Vietnam's 67.5 million eligible voters voted in the 2016 elections. While the ballot is anonymous, each voter's name, age, occupation, race, and address are displayed outside polling locations.

The election is taking place as the Southeast Asian nation battles a new COVID-19 outbreak that has infected about 2,000 people since its discovery in late April.

As per state media, voters in some remote areas, as well as a centralised quarantine centre in Bac Ninh province, voted early on Saturday. The province is part of the latest outbreak's apex.

A video clip on a local news channel reported organisers wearing hazmat suits spraying disinfectant on a ballot box, which was then taken to each elector in the quarantine centre for the vote.

"This is the first time an election has been held in the midst of the most deadly coronavirus epidemic, which has spread to nearly half of the provinces, with many of them under lockdown," Hue stated.