Earthquake in North India including Delhi-NCR, 6.3 on the Richter scale 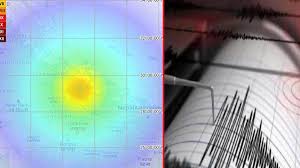 According to Nepal's National Earthquake Center (NSC), three earthquake tremors have been recorded in the far-west region of Nepal in the last 24 hours. The death toll in Nepal's Doti district after a house collapsed after last night's earthquake has now risen to six. A police official said the identity of the dead is yet to be ascertained, but a woman and two children are feared to be among the dead. 5 people are injured and have been taken to the hospital. Dozens of houses have been damaged in landslides at various places across the district.

Earlier, earthquake tremors were felt in many districts including Uttar Pradesh's capital Lucknow at 8.52 pm on Tuesday night. The magnitude of the earthquake was recorded at 4.9 on the Richter scale. The epicenter of the earthquake is said to be 10 km below the ground in Dharchula area on the Indo-Nepal border. However, there is no information about any damage due to the earthquake.